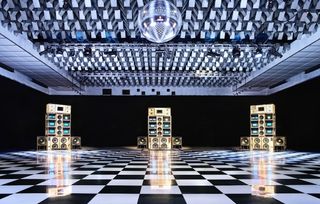 The system has been made in collaboration with LCD Soundsystem’s James Murphy, who designed it with recording engineer John Klett and Belgian artists 2ManyDJs, in an effort to bring the hi-fi sound to the club environment.

These towers house five amplifiers each: four MC1.2KW monoblocs and one MC452 two-channel 450W amp, and a drive unit array in a custom cabinet.

Each stack delivers 5700W of power, and the system as a whole delivers 77,600W. Less than B&W’s 120k watt Sound System, but powerful nonetheless.

McIntosh says a ‘normal’ set-up consists of seven stacks and one DJ station. A second DJ station, and the eighth stack are ‘spares’. The crossover points can be moved depending on the venue

The Despacio system can be heard at Citadel and Lovebox festivals in London in July, and the Electric Picnic festival in Ireland in September. More festivals are planned.