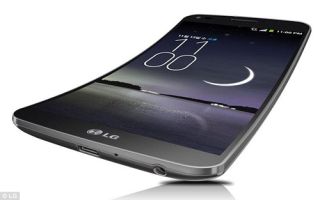 LG has finally unveiled full details and specifications of its new curved smartphone, the G Flex. The phone uses flexible OLED technology to enable screen curvature that ranges from 7.9 to 8.7mm in thickness at various points. LG claims this allows for improved ergonomics during phonecalls and provides a more engaging video experience.

Most interesting of all, the new smartphone features technology that allows the phone to 'heal' itself. A protective covering on the back is said to banish scratches within minutes of them appearing; LG describes this as being like Wolverine from the X-Men franchise.

The LG G Flex sports a 6in 720p display with 'Real RGB' pixel configuration; this is said to give brighter and more precise images. Qualcomm's Snapdragon 800 processor running at 2.26GHz is on hand to power the phone along with 2GB of RAM.

LG has also equipped the G Flex with a 13MP camera and a 3,500mAh battery. Additionally, LG has employed the same volume controls as seen on the G2, with the rocker being on the back of the device.

Curved screens appear to be the current trend for the big manufacturers. Samsung has just released a 55in curved OLED TV, which we recently reviewed. While we did in fact find it an immersive experience, we weren't too sure if it was entirely necessary.

Samsung has also released its own curved smartphone, the Galaxy Round. Whereas LG's G Flex offers curves vertically, Samsung's features a horizontal one.

It could be some time before we see the G Flex on UK shores though. LG has confirmed it will be released in its native South Korea, but talks of a full worldwide release are just speculation at the moment.