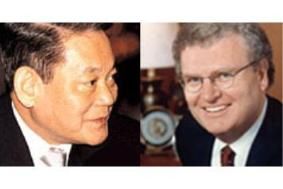 And while Samsung says the time and location of the meeting haven't yet been set, and declines to comment about the scope of the talks – as does Sony – the financial press is rife with rumours about the meeting.

Korea's Maeil Business Newspaper says sources have told it that Stringer is expected to ask for an increase in the supply of LCD panels from Samsung, and that the two will also discuss ways to enhance collaboration in other business areas.

Another prime area of discussion is set to be the development and promotion of 3D technology, according to the report, which also says the two will meet for dinner in Seoul next Monday.

The two companies currently produce LCD panels under a joint venture called S-LCD, which they co-founded in 2004 and in which billions of dollars have been invested.

A Korean press report earlier this year, claiming that a further joint investment of around £2bn was planned, was dismissed by Samsung at the time as groundless.

The announcement of the planned meeting comes as Samsung reveals a massive spending plan, which will see it investing 26tn won, or around £15.5bn, in manufacturing facilities and R&D.

The investment is designed to consolidate its global leadership in memory chips and LCD technology.

Almost £11bn of that will be spent on manufacturing facilities, with over 60% of the spend going into the chip business, to develop new lines for RAM, NAND flash memory and next-generation memory devices.

The rest will be invested in the LCD business, including the construction of a new eighth-generation LCD facility with a capacity of 70,000 panels a month.

Further spending will go into its mobile phone handset and general TV operations.

Sources close to Samsung suggest the investment will create 10,000 extra jobs, inlcuding 3000 in the semiconductor divison and 4000 in LCD production.