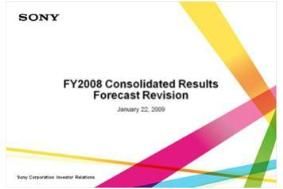 It's now anticipating operating revenue to be even lower than it announced just three months ago, when it thought it was on track to make around £1.2bn profit.

That announcement caused major consternation, but the company has now reduced its revenue expectations by a further 14%, to way below 07-08 levels.

Sony has also announced a further range of cost-cutting measures, and it looks like its LCD TV division will be hit hard. As part of a plan to reduce staffing in its TV design operations by 30% over the next year, it's planning to:

In December last year, the company announced a package expected to deliver annual cost savings over over 100bn yen (over £800m) by the end of next March. These new measures increase the savings to 250bn yen, or about £2bn.