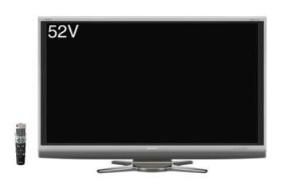 Power savings have been made by more efficient backlighting and the use of an ambient light sensor, reducing the backlight – and thus the power consumption – when the TVs are watched in a darkened room.

10th-gen LCD subsidiary
Sharp has also announced the establishment of a new subsidiary company, as part of its moves toward a joint venture with Sony to make and market large LCD panels and modules.

The company's new LCD factory, being built at Sakai, Osaka, will be prepared for the joint venture, planned as the first able to handle 10th generation LCD motherglass substrates.