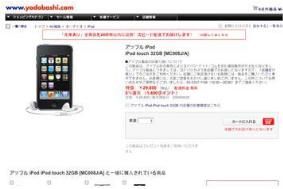 While it's still possible to see the products on their websites, Japanese consumers now have to visit a shop to buy them.

One of the best-known, Yodabashi Camera, put an announcement on its site just before the weekend saying it has stopped selling Apple products online, saying this was out of respect for Apple's wishes. The notice says 'We cannot sell Apple products to customers unless they come to our stores'.

Rival Bic Camera is also requesting consumers to come to its shops to pick up their Apple purchase, Kojima has simply halted online sales without explanation, and Yamada Denki's site claims that Apple products are either sold out or not yet in stock.

However, some online retailers are continuing for now, notably Amazon Japan and Joshin Denki, which says it has no plans to stop selling.

Contacted by the Nikkei business daily, Apple Japan refused to comment, saying that staff in charge of the matter were not available. The paper says that 'some industry watchers believe that [Apple] has cut out some sales channels because it was unhappy about online stores selling its products at a discount.'