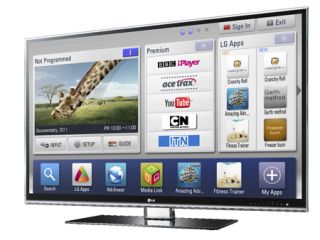 'Nano' is the new buzzword here on the LG stand at IFA, with the Korean electronics giant unveiling its LW980T range of passive Cinema 3D/Smart TVs with Nano Full LED backlighting technology.

LG claims its Nano tech creates "brighter, clearer and smoother pictures", and allows the TV's design to be slimmer than ever, with a depth of just 2.6cm.

The flagship TV series comes with seven pairs of passive 3D glasses, built-in wi-fi and a 'magic remote'. It will be available in the UK from late September in 47in and 55in screen sizes, priced at £1799 and £2499 respectively.

Smart TV remains a key focus for LG in 2011, with the service now boasting 175 different apps, including BBC iPlayer, ITN, Facebook and Twitter, plus more than 9000 films and TV shows via Blinkbox.

Also on show here is LG's HX906TX '3D Sound' home cinema system with a 9.1 speaker set-up and Dolby TrueHD/Dolby Digital Plus decoding, expected to go on sale in late October for around £900.

The Pentouch TVs are available in 50in and 60in sizes, at £1299 and £1899 respectively, include one pair of active-shutter glasses and have THX 3D certification.

Also on the LG stand at IFA is the company's Dual Play TV system for two-player games using modified passive 3D specs, which lets two gamers each see their own 2D full screen on the same TV.

The new technology, demonstrated by Microsoft and set to go on sale in a limited number of LG televisions, displays two separate pictures on the same screen, and then uses special 3D-style glasses to ensure that each player can only see one image.

LG's take on glasses-free 3D, in the form of its D2500N monitor with eye tracking, featured at IFA too.