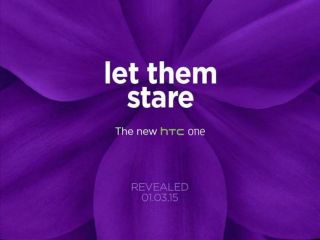 HTC's previous flagship offerings - the One (M7) and One (M8) - have both proved outstanding handsets and received five-star reviews as a result, with their design and build being of particularly high quality. But now it's time to start expecting the latest edition, and up until recently, it was possible it would've dropped the 'M' moniker. A Twitter teaser has put an end to such rumours though.

HTC announced on Twitter that "the new HTC One" will be revealed on March 1st. There were previous rumours circling that the upcoming HTC flagship would be called HTC Hima, but it seems HTC is sticking to its now traditional naming method. The only thing left to find out, is whether it will be called the HTC One (M9), or simply HTC One.

The new HTC smartphone will be unviled at Mobile World Congress in Barcelona on 1st March. A day before the show officially begins, which makes it look as if HTC wants to be first out the door with its 2015 flagship. What Hi-Fi? will, of course, be live at the show to bring you all the latest news as it emerges.

This HTC One (M9) is expected to follow a very similar design language to the previous M8. And that's no bad thing.

Tech website Phandroid has posted several leaked images that claim to show the new device and, well, it looks a lot like its predecessor. It's apparent that HTC will stick with the brushed aluminium unibody design.

One of the only real changes to the front of the device is the power button, which has been moved from the top to the right hand side. It's only a minor change, but one that will likely be well received.

French website nowhereelse.fr has given us a glimpse of what the rear of the phone is going to look like, and it's here where you'll see the most notable change. HTC appears to have ditched the duo camera seen on the One (M8) in favour of a single lens, this time with a square cut out. It's believed that HTC will also drop the UltraPixel technology found in the two previous phones, instead opting for a 20.7MP sensor.

It's unclear what camera will be used for the front - rumours suggest either a 4MP UltraPixel or 13MP, like the one found in the HTC Desire Eye.

Notorious Twitter leakster @evleaks has posted a series of images purporting to be the HTC One M9 that suggest it will come in two different sizes. We've now also been given a look at the front of the phone, and in particular, it's front-facing camera. The two phones appear to have a larger sensor, and perhaps it could be the same one taken from the HTC Desire Eye.

The larger phone also has a physical home button, that looks a lot like the one found on the Samsung Galaxy S5. HTC has done away with physical buttons in previous versions of the One smartphone, so for it to include one this time round is a little out the ordinary.

As ever, it's best to take all these rumours with a pinch of salt. We have just over a month wait to wait until Mobile World Congress and HTC's launch event.

You might have expected this - several different sources are citing different specs lists for the handset, so it's best to take all of them with a hefty pinch of salt.

A source close to Phandroid has claimed that it will come packing a quad-core Snapdragon 810 processor with 3GB of RAM. Elsewhere, it'll feature a 5in full HD 1080p display and 2840mAh battery.

The International Business Times, however, reports the Hima will include a Snapdragon 805 processor with 3GB of RAM; a 2K screen, producing 564ppi; and 64-bit computing. Internal storage is expected to be 64GB and 128GB.

Chinese site MyDrivers (translated via AndroidHeadlines) predicts the device will sport a 5.5in display with 2K 2560 x 1440 resolution; a Snapdragon 805 processor; 3GB of RAM; and a 16MP camera with Optical Image Stabilisation. The BoomSound speakers are expected to make an appearance once again and, this time round, it's rumoured HTC has partnered with Bose to produce them. The site also claims it'll all be powered by a 3500mAh battery.

One thing all the sources do seem to agree on is that the Hima will come running Android 5.0 Lollipop out of the box.

MORE: Read all our HTC reviews and news