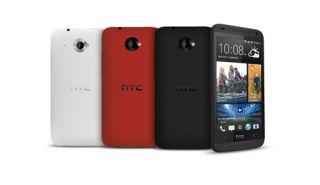 HTC will be unveiling two new budget smartphones at IFA 2013 this week, the Desire 601 and Desire 300, along with some accessories for the existing HTC One series and availability of the One and One Mini phones in a new colour.

First up is the HTC Desire 601, which sits somewhere in HTC’s budget range. It looks a bit like the One, except there’s a lot more plastic.

It will come packing a 4.5in screen and 5-megapixel camera, although this won’t be Ultrapixel like the 4MP snapper found in its more expensive cousin.

Under the hood lies a dual-core 1.4GHz processor and 1GB RAM along with 8GB internal memory.

A nice feature that isn’t found on the HTC One is the addition of a removal back for changing the battery and a micro SD card slot for expandable storage.

Features carried over from the One include the front-facing stereo speaker, the Sense 5 interface with Blinkfeed, and the ‘Zoe’ camera mode. It’s also the first budget phone to support 4G, and comes in black, white or red.

Further down the budget scale is the HTC Desire 300, the entry-level model in the Desire range.

It comes with a 4.3in WVGA screen, dual-core 1GHz processor, 4GB internal memory, 512MB RAM and a 5MP camera.

As with the Desire 601, there’s a removable plastic case for spare batteries and expandable memory but there are no front-facing stereo speakers here. It's available in black or white.

On the subject of colour options, the HTC One and HTC One Mini are getting a new paint-job. Following on from the Phones4U exclusive red version, HTC are releasing both phones in new ‘Vivid Blue’. It’s not yet been revealed which retailers will be carrying this colour.

The HTC Boom Bass is a portable Bluetooth subwoofer, designed to add bass reinforcement to the HTC One’s built-in speakers. It has NFC on board for easy Bluetooth pairing.

Next up we have the HTC Mini+. It is a phone for your phone: it pairs with an HTC One (or One Mini) via Bluetooth, and gives you a smaller device for calls and texts. You know, in case you don’t want to use your phone...

It also acts a remote control for taking photos from a distance and for use with your TV. It features a 1.5in OLED screen and NFC.

Finally, there’s the HTC Fetch. It’s a keyring that pairs with your phone via Bluetooth and allows you to find your phone within a 15 metre range; simply press a button and your phone will start ringing.

If you find you lose your keys with the Fetch attached, you can go online to find the last place your Fetch and phone were used.

No prices or release dates have been given for any of these products beyond a vague ‘Q3/Q4 2013’, but they will all be on display at IFA 2013 later this week.