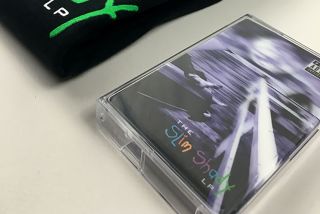 Several artists are releasing their albums on vinyl to cash in on the current revival, but it seems Eminem is targeting the true hipsters among us and re-releasing his second studio album, The Slim Shady LP, on cassette tape. Eminem announced the news on his own Twitter account, including a link to a site where you can sign up for early access.

It’s not clear why the album is being re-issued, nor indeed why Eminem has chosen tape as his preferred format, especially as the Recording Industry Association of American (RIAA) has said sales of cassettes are still too low to report. Still, if you do fancy grabbing yourself a copy, Groov-e will sell you a tape player for £18, or you could dust off your old Sony Walkman.

Eminem isn't the only rapper to make shock announcements in music formats, after Kanye West recently announced that his new album The Life of Pablo would only be available to stream on Tidal. Kanye hasn't made the album available to buy on download sites or in physical formats. While the release sent Tidal to the top of the App Store in the US, the album didn't chart on the Billboard 200 since Tidal doesn't report album streams to the RIAA.

MORE: That Was Then... Sony Walkman review