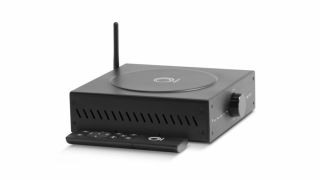 80th birthdays are hard to come by (apart from in Bowhead whale and giant tortoise families), and Elipson is celebrating its landmark anniversary not only by launching special edition kit but also by expanding its product catalogue.

The all-new MC Mini sits below the Music Centre BT (£900) in its now-two-strong amplifier line-up, taking a rectangular form rather than follow the French brand’s proclivity for spherical designs (we assume you’re acquainted with its Planet speakers? If not, a glance below will right that wrong.)

Like its sibling, the MC Mini can connect to a source over Bluetooth aptX, in addition to via its digital optical, RCA and 3.5mm inputs. Outputs include subwoofer, 3.5mm and a USB for charging devices, with a line-out connector allowing for a second MC Mini amplifier to be added to cater for a four-speaker configuration.

Elipson has kept things simple with a brushed black aluminum finish - no doubt so that the attention is kept on the striking spherical speakers the brand naturally hopes will be partnered with it.