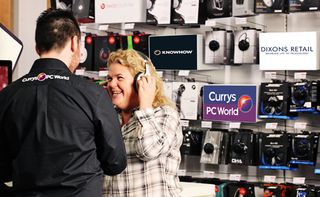 Two of the UK's most prominent electronics retailers – Carphone Warehouse and Dixons Retail – have announced they are to join forces in a merger worth an estimated £3.7bn.

It had been revealed just three months ago that the pair had opened talks on the potential for a tie-up – and that merger has now been approved by the boards of both companies.

MORE: Dixons in talks with Carphone Warehouse over potential merger

Under the terms of the all-share agreement, the shareholders of both Carphone Warehouse and Dixons Retail will hold a 50 per cent stake in the new entity – Dixons Carphone.

It is hoped the deal will "create a leader in European consumer electricals, mobiles, connectivity and related services", with both groups already boasting a substantial UK presence.

Meanwhile, Dixons has more than 900 stores across 12 countries – around 500 of which operate under the Currys and PC World brands here in the UK and Ireland.

Sir Charles Dunstone said: "We see the merger of these two great companies as an opportunity to bring our skills together for the consumer and create a new retailer for the digital age."

Dixons chairman John Allen said: "This merger will create a new, world-class British retailer for the new digital age, with new opportunities for growth and greater scale and reach."