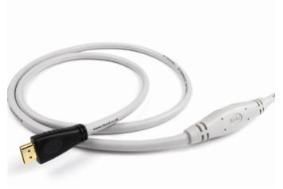 And while the high-frequency filter network built into all lengths of the new cable is said to improve all aspects of picture performance, Chord says that it also gives it a "more detailed, dynamic and crucially musically coherent sound".

The filter network is there to reduce the intra-/inter-channel skew between the four pairs of TMDS (transmission minimised differential signalling) carriers in the cable, and this, along with traditional Chord design elements, has delivered the performance improvements.

Video tests were also carried out using Denon, Arcam and Yamaha DVD and BD hardware, and the Sony PS3.