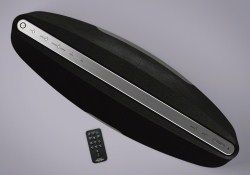 Made for iPod, iPhone and iPad, the new docks are led by the flagship RDP-XA900iP, with 200w of power and a 2.1-channel output. It will sell for £500 and hit stores in March.

It supports wireless audio via A2DP Bluetooth and Apple AirPlay. Next in line is the RDP-XA700iP (£400, due March), which drops the power output and loses the Bluetooth support but stil has AirPlay.

If you're after a portable option, the RDP-X280iP (£250, due June) has a battery good for six hours of playback, 2x20w of power from a stereo speaker configuration system and Bluetooth support.

Last but not least is the RDP-X200iP (£180, due June), which offers a similar spec to the '280 including Bluetooth wireless playback, but is mains-power-only.