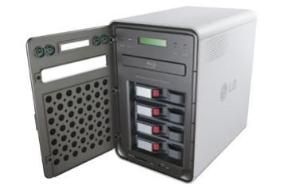 The new players are the BD370 and BD390, both of which add to the usual Blu-ray Disc functions access to content-on-demand options through new alliances with CinemaNow and YouTube, as well as access to HD streaming titles from Netflix.

Through its alliance with CinemaNow, the first website to offer pay-per-view movies from major studios and the first broadband distributor of high definition (HD) content, LG says it can now offer consumers access to more than 14,000 titles from the major movie studios, broadcast and cable television shows, more than 250 independent film titles and music videos from all major labels.

The players use the same network connection required for BD Live content to access the internet, and can thus stream those movies and more without the need for a PC.

Wired or wireless internet connectivity
The BD370 player has an Ethernet port, for wired network connection or to allow the addition of a wireless Ethernet bridge, but the BD390 goes one step further: it has built-in wireless networking capability.

Both players have 1080p upscaling for DVD, Profile 2.0, Dolby True HD and DTS Master Audio decoding and a USB input for content stored on portable devices. In addition to that wireless networking, the BD390 also has 1GB of built-in memory and 7.1-channel analogue audio outputs.

The BD370 should be on sale in the Spring, with the BD390 following in the Summer.

Network storage devices with Blu-ray
Meanwhile the company's IT division has two new products making use of BD, and designed to appeal to those of building systems around their computers. The N4B1 NAS unit has both a modular four-bay design able to accomodate up to 4TB of storage and a BD drive for backup and reading, compatible with all current discs up to 50GB.

The unit also has a memory card reader and three USB 2.0 ports, along with a Gigabit Ethernet connection, and can update and back-up PC data, share a single disc among many users and even stream content to the new Blu-ray Disc players. It's compatible with Windows, Linux and Mac operating systems.

The BE08 drive can burn a 25GB BD disc in 13 minutes, running at 8x speed, is compatible with dual-layer BD discs and has built-in DVD upconversion.