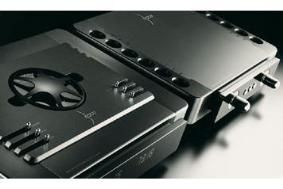 Bow was founded in the 1990s by Bo Christensen, who had previously started Primare, with the intention of bringing his experience as both qualified architect as and audio distributor to bear in creating 'designer' audio components.

Wizards Warlcoks and Wazoos
The Zz-One and Zz-8 were the launch products, and set the tone for audio components that look as good as they sound; the range has since expanded to include models such as the Wizard, Warlock, Walrus and Wazoo.

Recently Christensen has been concentrating on custom installations, and this has led to his creation of a new company: Christensen2 (Christensen-squared) will "design and execute ultra high-end audio and video projects on a worldwide basis".

He adds that “For me the design process has always been the most interesting
aspect of running my companies, and in the future I intend to concentrate fully on the creative process – both in Artora and for Christensen2.”

Durob will take over the manufacture of the Bow Technologies products, the company's Herman van den Dungen saying that “I expect and hope, by merging both Bo's design skills and his proven electronics with our company's high-end manufacturing and distribution experience, to make the Bow Technologies products more visible in the worldwide hifi-market.”