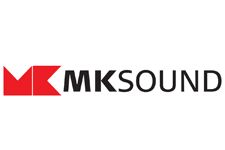 After almost 40 years with only standmount speakers and subwoofers in its line-up, MK Sound has announced its first floorstander - the 950F.

Still at concept stage (hence the lack of official pictures; apologies for low-lighting cameraphone shot), the 950F will become an extra option in MK Sound's range of THX Certified speakers.

The company makes bold claims for its first floorstanding design - which will stand 1.2m tall.

"In partnership with any MK Sound subwoofer, the sealed 950F enclosure ensures ideal integration across the full musical spectrum.

The 950F will use two identical identical 5.25in mid/bass drivers alongside the MK Sound Pro tweeter, and Phase Focused crossover.

MK has a word to say about grilles, too, proclaiming that the 950F's curved metal covers - held in place by hidden magnets in the speaker's front baffle - are acoustically inert.

"This design eliminates the annoying buzz or rattle that typically occurs when other brands dress up their products with cheap, lightweight, plug-in metal or plastic fronts," it proudly states.

We'll bring you more on the 950F as the speaker heads towards production - and hopefully our test rooms for a review.