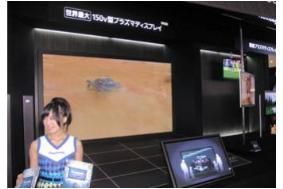 The new screen, part of the company's NeoPDP strategy which sees more efficient TVs being made through advances in the handling of larger glass sheets at its factory, and greater illumination efficiency to reduce power consumption, is the equivalent of four 65in sets arranged in a rectangle, and takes up the baton from Panasonic's 103in model in the huge TV stakes.

Despite its huge size, the new set's display is under 3cm thick, and is a real statement of what the company can achieve in this, its 90th year. It's also part of the events marking the change of name to Panasonic worldwide, which has also seen double page ads in all the Japanese newspapers, and extensive TV promotion of the change.

The company expects the rebranding commercials to be screened 100,000 times here in Japan between now and the end of the year, as it educates the public away from the much-loved National brand, until now seen on a huge range of domestic appliances, and part of the company's domestic strategy since 1927.

At the moment the company is the fifth largest electronics manufacturing company in the world, ahead of sixth-placed Sony, but while Sony is among the top brands in terms of worldwide recognition, Panasonic is some way behind.

It also suffers from a focus on the Japanese domestic market, wiith some 50% of its worldwide sales being in Japan, whereas Sony sells around 75% of its products abroad.

Analysts point out that Matsushita's use of the National brand in Japan simply emphasised that domestic focus - with the change of name the company is aiming for worldwide sales of 10 trillion yen by then end of the 2009-10 financial year, up from 9 trillion in 2007.

One major part of the worldwide focus will be its continued sponsorship of the Olympics, to which it's committed until at least the 2016 games.