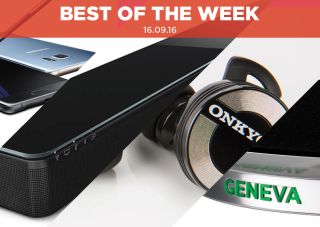 Sony has entered the 4K Ultra HD player market, but it's not the product many expected. Instead of a mass market device, Sony has opted for a high-end 4K player aimed at the custom install market. All the expected features, apart from Netflix 4K, are there, with a scheduled release date of Spring 2017.

Samsung could follow Apple and remove the 3.5mm headphone jack from its next smartphone. Samsung is reportedly pursuing its own proprietary connection, one that could end up leaving Android and iOS handsets with incompatible headphone outputs.

Bose has revealed some more details about its SoundTouch 300 soundbar and Lifestyle 600 and 650 speakers. The SoundTouch features wi-fi and Bluetooth and has 4K passthrough. The 650 Lifestyle range features the smallest satellite speakers in Bose's history, with six HDMI inputs that can carry a 4K signal. They'll be available in mid-October.

Apple denies rumours that it plans to acquire Tidal

Like the P5s before it, B&W has enjoyed great success in its revision of the P7s, adding wireless capability while retaining the high level of quality. Stylish and practical, with a good audio performance, we found no fault with these wireless cans.

The AeroSphere Small is much like its bigger brother, the AeroSphere Large, and that's no bad thing. It shares the latter's rich, balanced sound and impressive dynamics. To get the most out of it you'll need the expensive stand, but if you're looking to create a multi-room system, we'd highly recommend it.

Have we ever been disappointed by Marantz's 6000 series of separates? The PM6006 may be more evolution than revolution, but it's a solid effort for someone looking to own their first piece of hi-fi - and a clear improvement over the PM6005. With its smooth sound and decent set of digital connections, it merits an audition at the very least.