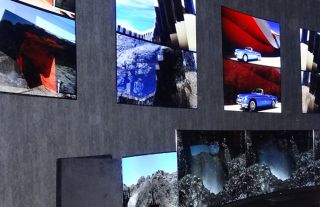 The BBC TV survey claimed 10 per cent of viewers would benefit from "better than HD" quality content based on current viewing habits - rising to 22.9 per cent if people were to buy the size of TV that they say they want (a noticeably larger one).

The BBC said "these results will be used to help plan future services", a none-too-thinly-veiled hint that the corporation is sizing-up a move to 4K and HDR TV technology.

Crucial to the BBC's 4K plans was the question of what size TV people planned to buy next. 50.1 per cent of people said it would be a larger TV, with 39.9 per cent saying they'd stick with the same size. The most in demand TV size for a future purchase? 49 inches.

It looks like the average TV size will continue to increase, a notion backed-up by the latest Gfk figures, which revealed 42 inch+ TVs accounted for the biggest growth area, while their figures (from October 2013-14) also suggested 11 per cent of UK households already had a set of 50 inches or bigger.

When that next, bigger TV is going to be bought remains to be seen. 30.5 per cent of respondents had bought a new TV in the last two years, while 50 per cent had a TV that was 2-5 years old. Only 18.9 per cent had a TV older than that. Gfk suggests the replacement cycle for TVs is around 9 years.

And what are we watching? Over 91 per cent of people watch broadcast TV, 61 per cent also enjoy Internet streaming, 68 per cent watch 'packaged media' (DVDs and Blu-rays) and nearly 40 per cent of respondents use their TVs for gaming of some description.

To make the most of that viewing experience we'd always recommend that people add external speakers but a hefty 60 per cent of respondents to this survey said they still rely solely on their TV's speakers. A more impressive 17.9 per cent indicated they had surround sound speakers, 9.5 per cent had stereo speakers and 8 per cent had a soundbar.

On average people admitted to watching 2-4 hours of TV per day - and we like doing it in the dark: 39.8 per cent of people preferred the room to be either dimly lit or completely dark when watching TV.

This means just 1% of respondents didn't consumer any TV at all (though people who don't own a TV were no doubt far less likely to take part in a TV survey...).

We can only hope this survey means the BBC will look to invest in 4K Ultra HD broadcasts sooner rather than later, in line with the growth in the number of 4K TVs on the market (at more affordable prices and realistic sizes) and in people's homes.

You can view the full findings, entitled 'A Survey of UK Television Viewing Conditions', on the BBC website here.

Does the BBC survey's results reflect your own viewing habits? Let us know in the comments below.

See all our TV news and reviews