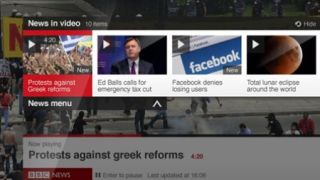 The app will bring video and text content to Samsung's internet-connected televisions and later on "a range of connected devices".

The app is due to go live on the Samsung Apps Store - which recently announced 5 million app downloads - from today.

The move aims to bring better value for money to licence-fee payers by repurposing BBC Online products for a range of devices.

Designed to complement the BBC's 24-hour news channel, it shows the corporations willingness to embrace new platforms and technology, as shown by the success of BBC iPlayer.

Phil Fearnley, General Manager for News & Knowledge in BBC Future Media, said: "Internet-connected TV is developing as a medium and presents an exciting and engaging complement to our existing TV services."

"Looking forward, we are particularly interested in creating seamless, personalised, and location-aware experiences of BBC News across all connected devices – mobiles, tablets, computers, and TVs."