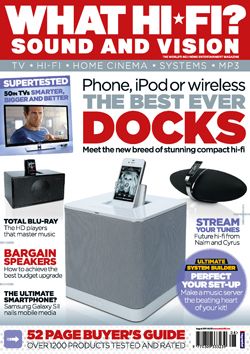 Has the Arcam rDock finally met its match? All is revealed.

And in The Big Question we ask three readers: "Does music streaming sound the death knell for the CD player?"

If you need a pair of budget speakers to give your existing hi-fi a boost, we test four budget models (£180-£210) from Acoustic Energy, Boston Acoustics, Dali and Mission.

At the other end of the price spectrum, our Temptation section this month features top-of-the-range speakers from Tannoy, PMC and Analysis Audio.

And in this month's Supertest we pit six large, 50-5in smart 3D TVs against each other, with prices starting from just £710. That's amazing value.

All this and more is in the August issue of What Hi-Fi? Sound and Vision, on sale now. And don't forget you can download our digital edition for just £2.99 + VAT.