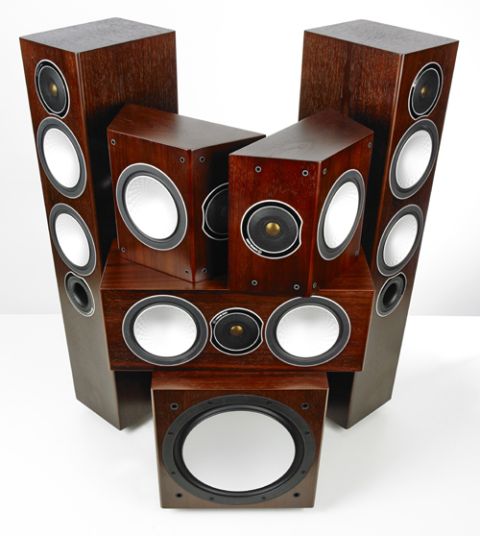 This is a top-notch surround package for the money. It’s a worthy alternative to the award-winning KEF R100 5.1

This is a hugely talented speaker package. We’ve known that ever since it came out of a First Test earlier this year clutching a glowing report.

Now, though, we have the chance to see just how much it can trouble our current Award-winning KEF R100 package.

Its talents start with superb build quality – which is very much Monitor Audio’s way – and extend to a wide range of finishes and sound quality that will worry most rivals.

It’s quite a hefty set-up – a fact made clear when we unpack it – but the care Monitor Audio has taken with the cosmetics has resulted in a surprisingly discreet yet smart proposition.

We’re really impressed with how elegant this package looks. It’s an impression helped by the clutter-free front panels on the front three speakers.

These don’t have any fixings for the grilles, and all the channels (bar the subwoofer) are free of visible drive unit mounting bolts when viewed from the front. Cleverly, the drive units are secured with a bolt arrangement through the back panel.

This not only looks neat, but it increases rigidity by using both the front and back panels to share the load of supporting the drive units.

There’s uniformity between the channels when it comes to drive units, and that can only be a good thing. All the channels use the same design of tweeter.

This is the latest development of Monitor Audio’s long-running gold-coloured metal dome, and it sounds cleaner and more precise than ever.

The 25mm driver is made of a ceramic-coated aluminium/magnesium alloy and is gold anodised to a specific thickness to achieve stiffness and a good level of damping.

This design is claimed to reach up to 35kHz before its first break-up mode, which gives it a decent degree of headroom.

The Silver range’s mid/bass driver (and the dedicated bass drivers in the 6 floorstanders for that matter) are 15cm units that use a similar ceramic coated alloy as the tweeter for their cone material.

Here, it’s strengthened by dimples, which help in giving it even greater rigidity without adding undue mass.

We’re big fans of Monitor Audio’s FX surround speakers. While most other manufacturers still persist in using one of their conventional small standmounters for surround duties Monitor Audio does it properly with dedicated design.

These can be configured for either bipole or dipole operation with the flick of a small toggle switch on the back panel. The choice between the two modes depends on where the speakers are placed.

If they’re mounted behind the listening position, we think bipole works best. But, as ever, there’s no harm in experimenting.

The W12 subwoofer is a neat design. It’s a broadly 34cm-sided cube and, like the rest of the package, is beautifully made.

Unusually, this sub uses a sealed enclosure, which in theory trades outright quantity of bass for improved precision and a greater flexibility of positioning.

The sub is also equipped with a mic-operated auto set-up function that evens out its sound in the listening room. This feature worked well in our test room.

The W12 offers three EQ modes – ‘Music’, ‘Movie’ and ‘Impact’. In our large test room, the ‘Music’ setting worked best, giving an even, but extended presentation that lacks little in terms of punch.

The complete Silver package is a deeply impressive performer. The use of common drive units can be heard easily in the consistency of sounds as they pass between speakers.

The tone and authority of these effects don’t change as they pan, and that leads to a more convincing surround effect.

Those dedicated FX surrounds help enormously. Their ability to disperse the surround channels sounds more widely than conventional (monopole) designs is obvious, and helps to fill in any gaps between the front and rear of the soundfield, as well as any sonic gaps between the surround speakers themselves.

Tonally, things are nicely judged. This is a refined package, which should work well with a wide range of amplification. But note, it can be provoked to sounding a little harsh in the treble.

A little care in matching wouldn’t go amiss. Equally, it’s revealing – as any good set-up at this price should be – so you’ll know about it if any part of your system isn’t good enough.

Our standalone review of the Silver 6s highlighted their slightly clinical approach to sonic replay, and this set-up shares that presentation.

For us it’s less of an issue in a surround context, as movie soundtracks are constructed in a very different way to music.

Here the Silvers’ clarity comes to the fore, and the package’s ability to keep control over a wide range of sound effects as well as the main vocal track impresses.

The main storm scene in the beautifully shot Life Of Pi is a great example of such a scene.

This film also highlights the quality of the Silver Centre, as it renders voices with impressive insight and precision.

Position it close to the screen and its dispersion ensures that the sound ‘locks on’ to the action on the display.

We’re taken with the subwoofer too. It’s not unduly large but still delivers a powerful and punchy performance.

In character it matches the surround channels well, so there’s a really pleasing top-to-bottom consistency between the frequency extremes, which isn’t always the case.

The package works well with music too. In stereo, the Silver 6s emerge as insightful, polished performers though lacking small doses of finesse, natural warmth and exuberance.

With a surround disc such as Michael Jackson’s This Is It, it’s the cohesion between the channels that comes to the fore, as well as the punch, authority and agility on offer.

Overall, this Silver 6AV12 is a hugely capable package.

It’s an appealing alternative to KEF’s similarly priced and award-winning R100 5.1 set-up, and that makes it worth serious consideration.