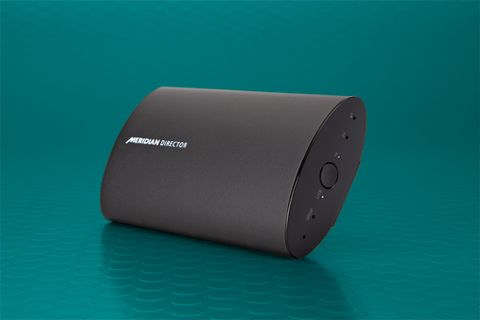 The Director is the second in Meridian’s range of standalone DACs and follows on from the excellent portable Explorer, a firm five-star favourite of ours.

The Director is quite small and boasts fewer connections than many of its direct rivals – indeed it looks and feels about half the price of some. That compact size and squashed cylindrical shape does, however, add an air of distinction when compared with all those other rectangular boxes with their straight lines and right-angles.

The feature count is limited, but that’s understandable given the amount of space the Meridian engineers had to work with. The USB socket (Type B) acts as a conduit for digital files, but also as a way of powering the device. It’s class 2.0 too, so will cater for high-res 24-bit/192kHz files.

The Meridian has one 3.5mm socket on the rear, which doubles as an optical and coaxial input. You’re provided with the relevant adapters in the box. We assume it's all in the name of space-saving, but an integrated headphone output wouldn’t go amiss.

That minimalist rear panel is matched by an equally unfussy fascia. There’s a small input selector button in the middle; white LEDs on either side indicate the input being used and the sample rate being received.

Instead of using an actual figure to represent the sample rate, the Director uses the figures 1x, 2x and 4x as indicators – it’s a little overcomplicated and unnecessary.

Feed it a lowly compressed Spotify stream of Kings of Leon’s Wait for Me, and the Director really brings the track to life. Strings sound clear, natural and sharp, drum beats hit with precision and sound pleasingly solid.

Whatever the quality of file, the Meridian manages to uncover more nuances and subtle details than virtually any of its rivals. The DAC emits a great sense of space that allows instruments and vocals to breathe.

Switch to a bass-heavy track such as Massive Attacks’s Angel, and there’s depth and weight to the probing lows, but they don’t lag or sound loose. Our only reservation is the Director seems so caught up in analysing the track and digging up detail, it seems to take its eye off the actual flow and rhythm.

Angel just doesn’t build the same sense of tension as through, say, the Arcam irDAC and you don’t feel quite as inclined to listening through to the end.

The Meridian may be impressive for detail retrieval, but over bouts of long-term listening, this DAC just isn’t as fun to listen to as some rival devices.