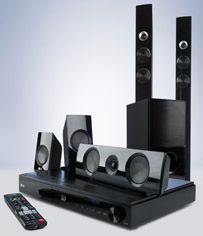 The LG is talented enough to warrant a serious audition, despite its lively treble

This system comes with some rather fancy-looking tall-boy speakers. Granted, these towers aren’t especially subtle or discreet, but they’re solid, sturdy and stable. And they give the impression that you’re getting a lot for your money.

The LG doesn’t really need too much help there, though, boasting as it does a healthy list of features and functions.

There are twin HDMI sockets for external kit, and an ethernet socket and built-in wi-fi for accessing the web and enjoying the system’s ‘smart’ functionality – which includes Apps, video on demand and internet radio.

There’s also a connection for LG’s iPod dock, which comes as part of the package.
The remote control is longer than most, which makes it slightly less manageable.

Still, via the menus you have access to all speaker distances, levels and a test tone, so you should be able to get decent results without a tantrum.

There’s also a small upgrade path; the speaker cable connections are normal spring clips, so you could swap it all out for runs of budget (around £3/m) wire.

As it is, the HX906PA sounds lively and exciting. The panning of surround effects is handled well and the system erects a cohesive sound field.

Dialogue from the chunky centre channel is extremely clear and convincing; during The Expendables, the LG manages to decipher Sly and Arnie’s mumblings with relative ease.

When the film explodes into life, the subwoofer remains relatively controlled. Indeed, it’s to the top of the frequency range that your attention gets drawn.

Here, the LG can be a little bright. There’s detail to be had, but the lack of finesse leads to the odd wince when cars, bodies and bullets start smashing and crashing.

Good Blu-ray pictures
Blu-ray images (2D and 3D) are detailed with a good sense of depth. Colours are bold and bright, and there’s fine detail to be found in the darker scenes of Harry Potter and the Deathly Hallows.

But edges aren’t quite as sharp as those drawn by the best and there’s a touch more noise and instability when watching DVD.

None of that, though, is by any means off-putting, and the LG does more than enough to cement a solid four-star rating.