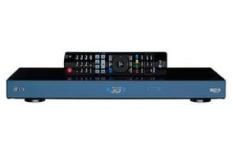 The BX580 is a decent player, but it’s outclassed by some stunning competition

LG definitely seems to be looking to the future with its BX580. The design itself is sleekly minimalist, with just two buttons visible on the outward casework, and a seamless, glossy front panel that hides the disc drive, USB connection and remaining operation buttons.

Switch it on and the menus are similarly stylish, with each icon contained in a transparent, floating cube.

It's forward-looking in its specification, too, thanks to an internet service and network streaming that's accessible via the ethernet connection or built-in wi-fi.

Minimal connections
Unfortunately, there's not much of a nod to the recent past, as the BX580 lacks a multi-channel analogue output or secondary HDMI, which means owners of anything but the newest AV receivers will have to make do with standard-definition surround sound when watching 3D.

If that doesn't bother you, or if you partner the LG with a 3D-compatible receiver, you will benefit from a very good 3D performance.

Play Monsters vs Aliens and colours are vibrant but just about as natural as you'd expect an animation with such a title to be, which means Susan's skin is realistically human, while the gelatinous B.O.B. is bright and luminous.

However, while the obvious pop-out-of-the-screen effects – like the ping-pong ball at the beginning – do exactly that, the general picture lacks the overall depth and three-dimensionality of other players.

Lacks excitement with 3D
It's still 3D, but it's more subtle and less exciting than it could be, and there's some blur to motion that, while not unique to the LG, is avoided by the best rivals.

Switch to The Duchess on Blu-ray and the characters actually pop off the screen, though not in an entirely convincing way.

The 2D HD performance is an impressive one. There's plenty of detail to the abundant wigs and patterned dresses, blacks are deep and convincing, and whites are bright but glare-free.

The BX580's a good upscaler of DVDs, too, offering up The Ghost with an impressive combination of image stability and fine detail, so you can see all of the imperfections in Pierce Brosnan's reluctantly ageing face, but you're spared the occasional shimmer that some rivals find in tight patterns.

Capable, but not brilliant
Whether you're watching a movie or listening to a CD, the LG defines audio with a precise leading-edge, but lacks the insight to properly fill it out, which leads to a delivery with decent pace, but a touch of overall hollowness. It's still good, but it's not quite put-it-on-a-pedestal standard.

And that's the BX580 all-round, really. It's a capable player that in isolation is difficult to fault, but the fact remains that close comparison proves you can do even better.