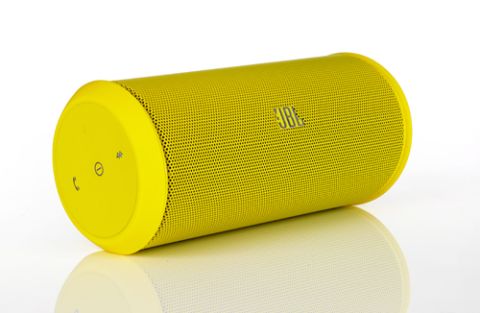 Good performer for the money, but isn’t a fully rounded package

We loved the original JBL Flip, praising it as ‘a sensational blend of portability and performance’.

A year on and a number of improvements later, we’re pleased to say we’re suitably impressed the second time around.

Keeping the same cylindrical design as its predecessor, the Flip takes its name from its ability to be used in either vertical or horizontal positions.

It’s worth seeing which works best for you, but we found it to be more engaging placed vertically.

This also gives you easier access to the controls, which sit rather awkwardly out of sight on the left-hand-side when horizontal.

The controls have been subtly tweaked too so they no longer stand proud of the Flip’s design, but are built into it instead.

You see nothing but icons on the surface, but find a satisfying click when you press them.

Other tweaks to its design include a standard microUSB charging port in place of the proprietary one previously and the addition of near-field communication (NFC) for quick Bluetooth pairing.

As before, it comes with a carry case to protect it while on the move. Behind the Flip 2’s grille sit dual 40mm drivers driven by 6W amplifiers and a bass port, which produce quite a performance for a portable.

Its strength lies in the midrange, with voices pushed forward to create a clear presentation that lends itself well to vocal-heavy tracks such as Prince’s funk-driven tune The Breakdown.

The Flip 2 has a great sense of rhythm too, and is quick enough on its feet to handle all the attitude of Daft Punk’s Lose Yourself to Dance. It’s an exciting listen.

We would like more weight in the low end though, which feels a little restrained with bass-heavy tracks.

The treble can also sound pushed at times – particularly at higher volumes.

The Flip 2 can go impressively loud but, as with many speakers of this type, that doesn’t mean it should.

We’d recommend keeping it a few notches under the max if you want to keep things comfortable.

Luckily, when outside, this flaw is less noticeable, with its presentation more evenly balanced.

The prominent midrange actually lends itself to outdoors, as vocals and melody are clearly heard no matter the surrounding noise, while its exciting character is not lost either.

Our only other gripe is with the Flip 2’s battery life: at five hours, it falls short of the competition and while it’s fine for a day in the garden, for a weekend’s camping it could be troublesome.

The JBL Flip 2 has made some positive improvements to its predecessor, but it’s still not perfect.

To earn five stars, it needs more substantial bass kick and, of course, there’s the significant problem with its battery life.

A highly praised four stars it is, then, for the JBL Flip 2.