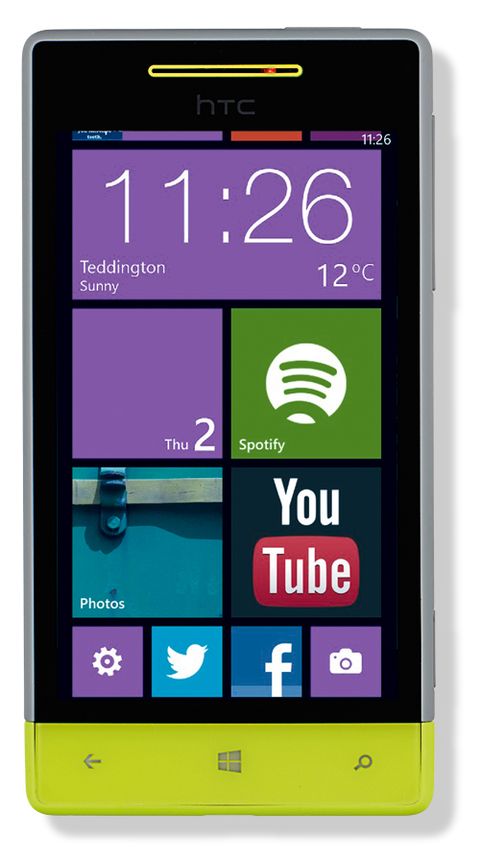 A capable and fun, if feature-light, Windows Phone experience for a great budget price

The HTC 8S is no Windows Phone flagship – it’s a budget offering that doesn’t come with all the power and glitz of smartphones like the HTC One, Samsung Galaxy S4 or Apple iPhone 5.

We’ve encountered its top-range sibling the HTC 8X before, and weren’t too impressed with its performance at that level. However, the mid-range HTC 8S turns out to be a much friendlier experience, especially for first-time smartphone users.

We like the Windows Phone 8 interface. It’s a refreshingly neat, minimal design compared with the Apple and Android leaders, and it’s simple to get to grips with too. The Live Tiles are a fun alternative to app icons, the floating text on a black background (you can switch this to white) looks stylish, and you can also change the colour scheme to match or contrast with the handset’s finish.

Bold colour schemes are a hallmark of recent Windows phones, such as the Nokia Lumia 925, and the HTC 8S is no exception: its two-tone design (available in grey and yellow, black and blue, or black and white finishes) will certainly attract attention, and is a lot more interesting than the HTC 8X’s single-colour body.

At 113g it’s light in weight as well as in colour, and the smooth plastic casing has curves reminiscent of the iPhone 3G and 3GS. Despite the plastic casing, the small 8S feels nice and grippy to hold.

The HTC’s 4in screen features an 800 x 480-pixel resolution with 233 pixels per inch – keeping it on par with the LG Optimus L5 II, although neither can match the depth or sharpness of the iPhone 5.

The Windows Phone interface has simplicity on its side, so the 1GHz dual-core processor powering the phone has no issues keeping things running smoothly. Unlike the BlackBerry Z10, there’s also a battery-saver mode that adjusts the screen’s brightness automatically to keep the 1700mAh battery going for just that bit longer. Wi-fi, 3G, Bluetooth and GPS cover all the essential connections.

As you’d expect from a mid-range handset, it doesn’t have much internal storage on offer. 4GB sounds positively stingy, but there’s good news: slip off the bottom coloured panel and you’ll find a microSD card slot that offers up to 32GB of additional storage – so you can add plenty of apps, music and videos without worrying about running out of space.

On the subject of apps, the Windows Store is still relatively fresh, with official apps slowly making their way there. There’s finally a BBC iPlayer app, but you’ll be disappointed if you’re keen on downloading a lot of the latest gaming and entertainment apps.

There is a handful of ‘HTC apps’ to download, but they’re mundane offerings such as a torch and a photo enhancer. They join the existing One Note and Office apps, which are handy for quick note taking and creating and editing Word documents. You can also sync these files to a SkyDrive account (you get 7GB free with the new 8S).

Facebook and Twitter cover the social-media bases, and are integrated into the Windows ‘Me’ profile – a neat feature that pulls notifications and posts into one area. You’ll need to create a free Windows Live ID to access all these features, as well as syncing files to a SkyDrive account.

Taking pictures can be a bit fiddly. You can press and hold the button sitting on the lower right edge to focus and capture, or touch the screen directly – which can deliver fuzzy pictures if you don’t hold steady.

There’s no front-facing camera either, so Skype video calls will be quite awkward (unless your contacts don’t mind talking to the wall on the other side of your room). The 5MP camera with 720p video recording takes decent (if slightly oversaturated) photos, though, with close up shots looking sharp even in low-light conditions.

Unlike the Nokia Lumia 920, you don’t get colour-match earphones supplied with the HTC 8S. The included in-ears are white with flat rubber cables, and nowhere near as comfortable as those offered by either the Nokia 920 or the HTC One. You do get the HTC-associated Beats Audio feature, though, which gives you some added bass weight when toggled.

Switch to a more comfortable pair of SoundMagic E10 earphones, and the HTC sounds decent when streaming Fiona Apple’s Every Single Night on Spotify. While we’re not expecting oodles of refined detail, there is a lively warmth that’s easy to listen to.

Turning on Beats Audio does indeed add some extra oomph to the vocals and basslines, but we liked the all-round balance and openness with the feature turned off.

While we were relatively disappointed with the Samsung Galaxy S4 in terms of sound quality, it’s worth noting that the S4 delivers a much more rounded, detailed and dynamic listening experience.

Things are better when it comes to video quality. Play the Star Trek Into Darkness trailer in YouTube HD, and the HTC 8S delivers a sharper and more exciting picture than BlackBerry’s flagship Z10. Upload an mp4 video file of a Firefly episode and colours are punchy and vivid, with inky black levels. Ramping up the screen’s brightness level to ‘High’ yields clean, brighter white levels.

There’s a good level of detail here that’s quite impressive for the price, and we found the warm-tinted palette much more comfortable to watch compared with the slightly washed-out and noisier LG Optimus L5 II’s video.

While it won’t match pricier smartphones such as the Apple iPhone 5 for outright sharpness and subtlety, the HTC 8S is a decent video-player for a budget handset.

That SD card slot is crucial if you want to watch a lot of videos, though – the limited 4GB storage space on board meant that we could only upload one episode at a time, and a full movie file was out of the question.

So where does that leave the HTC 8S? On one hand, it’s nowhere near matching the performance, in either sound or video, of much pricier and capable rivals, but neither is it trying to. This is a smartphone that’s available at a fraction of the cost of the flagships (between £160 to £230, and with cheaper monthly tariffs) and yet it’s a rather decent smartphone for all its limitations.

Day-to-day use is comfortable and there are no hiccups, and the Windows Phone interface is a great way to introduce people to smartphones if it’s their first handset. We wouldn’t mind keeping the HTC 8S to hand.