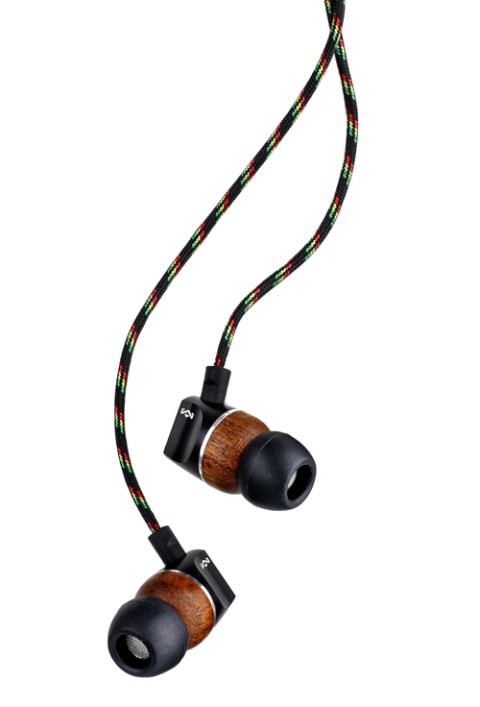 House of Marley is doing a lot of things right, but sound quality still lags behind

There’s a lot to like about the House of Marley approach: the recycled materials used for the packaging, and the recyclable aluminium and FSC-certified (Forest Stewardship Council) wood used in the construction of the headphones themselves.

There’s also the charity work it does with 1Love. It’s enough to convince you that the Marley branding is more than a marketing exercise, and enough to make you want to like the headphones.

We haven’t liked them in the past though, with two-star ratings accompanying both the Redemption Song and Stir It Up on-ears.

Thankfully, while still far from brilliant, the Zion in-ears are better than that.

Alongside the eco-friendly build, there’s solidity as well – the Zion’s feel really nicely put together.

The metal back of the driver enclosures is shaped to fit perfectly between thumb and forefinger, and we have no problem getting a very snug fit and impressively noise-isolating seal from the middle-sized buds (of the five pairs provided).

The fabric cable has the trademark Rastafarian colours, proves resistant to tangles and is strong enough looking to give the impression it will last the travails of commuting.

There’s an Apple-standard three-button remote and mic too (Android users should double-check compatibility before buying), but it feels less well-made, with a bit of wobble and rattle where the two plastic sections meet.

It’s also right down at the Y-connection of the cable, which is a little too far down for our liking – your voice won’t be quite as clear to those on the other end of the phone and getting to the unit is a fumble if you’re the type to run headphone cables under clothes.

We’ve always found House of Marley headphones to have a little hardness in the treble and boominess in the bass, and while the Zions are much more controlled at the extremes of the frequency range than some of their predecessors, they still carry the family DNA.

One For the Road by Arctic Monkeys is supposed to be pretty bassy, but the Marley’s exaggerate it to slightly overbearing levels.

They also rob the bassline of its tunefulness, turning a fairly playful sequence of notes into one that’s rather flat and monotone.

Switch to Alt-J’s Tessellate and it’s the treble that stands out. The saucepan strikes (yes, it really is a saucepan, not a cymbal) that drive the track stand out that little bit further than they’re supposed to – just enough to distract from the vocals and other instruments.

It’s not especially harsh, just a touch hard, and once your ears have been attracted to it you’ll find it hard to ignore.

In other areas, the Zions are perfectly adequate. Tracks flow quite nicely, vocals are clear and focused, and the weight offered by the bass does at least make for a big, chunky delivery.

The problem is that even in these areas the Marleys are comfortably beaten by the best in class. Pick up the Sony MDR-EX650s - for example - and you will get greater punch, dynamics and detail, as well as better bass definition and cleaner treble.

There’s nothing wrong with getting the Zions if you like the look and appreciate what House of Marley stands for – just know that you can get better outright sound quality elsewhere for the same sort of money.