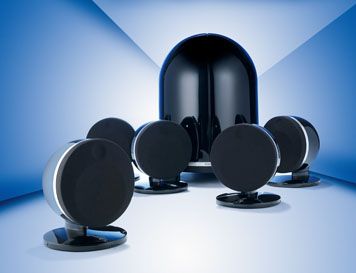 A surefire hit for movie and music buffs. The Dôme is a really talented package, and now better value too

Even before you hear it in action you get the feeling that every single penny is fully justified. The black lacquer finish combined with the die-cast aluminium surrounds gives the speakers a premium look and feel.

Each satellite weights just under 2kg and the level of build quality is second to none.

Brave souls can opt for red or white finishes, and the intricate stand design lets you pivot the satellites through 90 degrees, so wall-mounting won’t trip you up.

Clever-clogs tweeters
Twist and pop off the satellite grilles and you’ll see the Dôme’s two-way design. Focal uses a 10cm Polyglass cone for the midbass driver and a 25mm inverted dome tweeter.

The company has gone for an inverted tweeter in the belief that it improves dispersion and helps to create a more precise soundstage. And it seems to bear fruit, too.

The domed subwoofer has a bullet-esque appearance, which makes it stand out in the crowd.

It’s a downward-firing design, so it can hug on a wall or be placed in free space without affecting its sound. It uses a 100W digital/analogue hybrid BASH amplifier, (BASH technology is used on all of Focal’s subwoofers).

Doddle to set up
Set-up is simple enough, although as is the case with the majority of systems out there, you need to feed cable into the base of each speaker and secure using an Allen key and bolts.

You’ll also need to remember to switch the subwoofer’s crossover setting to ‘Dôme’ before you run through the system set up if you’re using the speakers in a 2.1 configuration.

From the off, this package handles movie soundtracks with aplomb.

The subwoofer is extremely generous when it comes to dishing out bass weight and power. Thankfully, though, it never sounds thick or tubby.

The satellite speakers create a solid, well-organised soundstage. It isn’t be the widest, but you can pinpoint all the surround effects.

During the underground shootout in The Town, the action comes at you thick and fast, but the Dôme package makes perfect sonic sense out of it all and hits you with some serious dynamics.

A revelation with music
Our opinion of the system went up another notch when we switched to music.

The Dôme 5.1 is a revelation, combining potent dynamics with rhythmic nouse. Spin Foo Fighters’ Best of You and you soon find your foot tapping away in agreement.

We were happy to give the Dôme 5.1 a five-star rating two years ago at £1500, so it will come as no surprise that it hangs on to those five stars at its new, lower price.