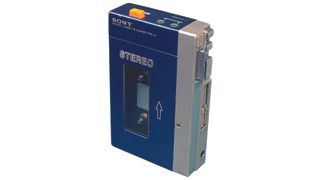 Imagine leaving the house without mobile music? We know, perish the thought. Music-on-the-go has been a simple pleasure for decades – but not in the smartphone and wireless earbud combination we know it today.

Portable radios filled pockets in the 1950s, but when the first Sony Walkman personal stereo cassette player (the TPS-L2, pictured top) went on sale for around $150 on July 1st 1979, it would change the way we listened to music.

The Walkman cassette player, devised by Sony co-founder Masaru Ibuka, may not have touched a production line in nearly ten years – Sony ended manufacturer in 2010 – but the Walkman lives on, not only in the deepest corners of eBay and as high-resolution music players.

Today, 1st July 2019, marks the Sony Walkman's 40th birthday, and to celebrate we’ve dug out six strange facts may not know about the iconic gadget...

1. It was based on Sony's Pressman

Rather than come to Ibuka in a life-changing dream, the Walkman was a modified version of its Pressman mono tape recorder, which Sony had launched in 1978 and marketed to reporters for recording audio.

Sony chairman, Akio Morita, wanted a device to listen to opera on his many trans-Pacific flights, so Sony engineer Nobutoshi Kihara removed the record function and speaker and replaced it with a stereo amplifier – and hey presto, the music player was born.

According to Sony records, Morita said of the device: "This is the product that will satisfy those young people who want to listen to music all day. They'll take it everywhere with them, and they won't care about record functions."

It didn’t take long for the word "Walkman" to enter the Oxford English Dictionary (1986), but the player didn’t go from being called “stereo playback-only device” to “Walkman” overnight. Sony US’ first suggestion was the Sony Disco Jogger – disco and jogging were all the rage at that time – but that was ultimately seen as too restrictive a description.

The TPS-L2 actually launched as the 'Soundabout' in America, the 'Stowaway' in the UK and 'Freestyle' in Australia and Sweden. But in Japan it was 'Walkman', and that’s the name that ultimately caught on worldwide.

3. It actually made people walk more

One of Bill Bryson’s more amusing anecdotes from America (“not long after we moved here we had the people next door round for dinner and – I swear this is true – they drove”) would have been far less likely to occur in the decade of the Walkman.

According to a TIME article, the number of people who said they walked for exercise increased by 30 per cent during the height of the Walkman’s popularity during the late ‘80s-early ‘90s. So it successfully lived up to its name.

4. There was a solar-powered Walkman

In 1983, Sony launched the WM-F107, a solar-powered FM/AM cassette player. No batteries necessary? Hmm, not quite. The player's radio could be appropriately powered by the solar panel, which covered nearly the entirety of the player's back, provided the sun had its hat firmly on, but for cassette listening the built-in rechargeable battery was required.

Aptly finished in yellow (a white version was also available), but perhaps a bit more trouble than it was worth, the WM-F107 is hard to find these days, as in a lot of cases their batteries leaked.

Andreas Pavel did! "Mr Pavel invented the device known today as the Walkman. But it took more than 25 years of battling the Sony Corporation and others in courts and patent offices around the world before he finally won the right to say it," reported The New York Times.

The German inventor patented the portable personal player in several countries in 1977, two years before Sony went to market, but hadn't found a manufacturer for his "stereobelt" player by the time the Walkman arrived. It wasn't until 30 years later that Pavel settled the patent infringement dispute with Sony, reportedly for a multi-million-pound payout.

Sony stopped selling the Walkman in 2010, the same year they stopped selling floppy discs, but having sold 200,020,000 cassette players, and 400 million total Walkmans of all variations, there are naturally still some kicking about on eBay. You just might have to pay a fair amount of money...

Of course, the Walkman brand is still very much alive and kicking, with the odd portable CD player and, more prolifically, digital MP3 and hi-res variants like the Sony NW-ZX300 Walkman.

Cassette Store Day: A look back to 1985 and the blank tape's heyday