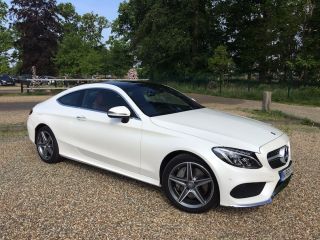 Would you rather have enough money to buy a house, a sports car, or a speed boat? A difficult dilemma, we know. For the price of a Burmester separates system you could probably afford one of the above, if not all three.

When you consider the company’s flagship standalone CD player, the Burmester 069, costs a wallet-withering £35,840, by the time you’ve added a matching pre/power amp and a suitable pair of speakers, you won't get much change from £130,000. And that’s before you add cables!

Alternatively, you can get a taste of Burmester for a fraction of the price if you happen to be contemplating a shiny new Mercedes-Benz. A Burmester audio upgrade is available as an optional extra for various ranges and models, including S-Class, C-Class and the super-sporty AMG GT.

The Burmester Surround Sound System in the Mercedes C-Class costs £2995 and comes as part of a Premium Plus Package, which also includes other tech goodies including an 8.4in high-res colour display, ambient lighting, Keyless-Go, voice control and that must-have car accessory, a panoramic glass sunroof.

That’s quite a lot of kit for your £2995 which makes the Burmester system, on paper at least, look pretty decent value.

Midrange/tweeter combinations can be found in each of the four doors (paper domes for midrange drivers and fibre domes for the tweeters), and there’s a centre speaker in the middle of the top of the dashboard. The drivers are positioned behind attractive speaker grilles etched with the Burmester logo.

The lowest frequencies are aided by Mercedes’ ‘frontbass’ technology, where the woofers are built into the front of the car body instead of the doors. The tech uses the driver and passenger footwells as acoustic horns to boost sound pressure.

The Premium Plus Package automatically upgrades you to Mercedes' Comand Online System, which combines sat-nav, infotainment and online connectivity.

All the action happens through the high-resolution display which protrudes (a little awkwardly) from the middle of the dashboard.

A touchpad and scroll-wheel pairing on the centre console is your main point contact with the system. It looks like something you could use to parallel park the USS Enterprise and although it looks relatively interesting compared to some rival systems, it feels over-engineered and overly fussy in use.

Both the wheel and touchpad carry out similar functions and you can’t help but feel all the different processes could be simplified and streamlined. You’ll often find yourself swiping when you should be rotating or vice versa.

The pad uses a touch-sensitive surface combined with buttons for navigating the audio and telephone menus and accessing any favourite channels stored on the system.

It responds to both single and two-finger gestures. You can swipe up to show menus, and alter volume by spinning two fingers clockwise or anti-clockwise.

MORE: Android Auto? How it works, the apps, cars, features

Bring up the equaliser on the car’s display and it’s dressed like the front of a Burmester amp, complete with Burmester logo and a brushed aluminium skin. It’s sweet, if a little cheesy. From here you can adjust the treble, “midtones” and bass.

Besides these general tone controls, the system can also create virtual surround sound from any source.

Turn it on and you notice a subtle lift in the soundstage from the top of the dashboard to higher up the windscreen, just past ear height.

The soundfield gains greater depth and spaciousness in which instruments and vocals sit. The trade-off is a slight loss of focus and solidity, but we'd happily listen to either, with some tracks actually suiting the extra surround processing.

You can also alter the balance of sound in the car depending on the number of people present. The system can be set to spread sound evenly through the car, or can be focused purely on the front or rear.

The Burmester system sounds pretty balanced from the off. The majority of in-car systems we’ve listened to tend to require dialling down of the bass, but with this set-up you might actually feel a tweak in the opposite direction is needed.

Spin Macklemore and Ryan Lewis’ Downtown and the Burmeseter set-up captures the upbeat, feelgood funkiness of the track. From the moment the piano springs into life and the bassline drops, the Burmester system is on the front foot.

There’s a good level of detail throughout - it’s expressive and not afraid to live on the edge. Some rival systems we’ve heard from Meridian and B&W tend to err on the side of caution, but there’s a cut and thrust and sense of dynamism with this arrangement that keeps your attention.

Compared to the traditional Burmester sound, the in-car system is a little smoother at the top end, but there’s still more than enough sparkle and bite to keep you interested.

Our only disappointment is that bass notes tend to sound a little tubby and they’re a slightly different character to the highs and mids. Lows are less agile and more ponderous so they have a habit of tripping up the rhythm of the music.

In the grand scheme of in-car audio options, ticking the Burmester box makes a lot of sense. It might not represent quite the same level of value as Dynaudio's Excite package for the Volkswagen Golf, but it does come with a host of additional features for the car. It’s a premium that we'd certainly consider paying.