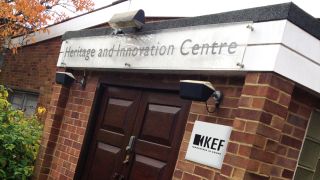 Raymond Cooke founded KEF in 1961. He was a BBC trained engineer that went on to work for Gilbert Briggs at Wharfedale for five years, before branching out on his own. The company’s name stands for Kent Engineering and Foundry and it has been based in Tovil, Maidstone from the very beginning.

A prime driver for going solo was that Cooke wanted to move away from the conventional drive unit materials that Wharfedale was using at the time (paper) to the various plastics that were just becoming available. And the rest is history. We took a trip to KEF HQ to take a look at some of the company's classic speakers.

KEF’s first speaker was the K1 monitor. It revealed Raymond Cooke’s thirst for cutting edge drive unit technology and his BBC-based engineering background. This was a three-way speaker, standing tall at just over a metre high. The bass driver used a flat rectangular diaphragm made of aluminium-skinned polystyrene, as did the elliptical midrange. The tweeter had a Melinex dome. Melinex is a polyester film known for its high tensile strength and chemical stability.

The K1 has a hefty 110-litre enclosure that is braced and heavily damped to control resonances. It was available in three finishes: American Walnut, Teak and Sapele with a coffee fleck grille.

Back in the Sixties there was a big market for kit products, so the K1 monitor was available in both ready-built and kit form. There was also a third K1 model in the form of the Slimline, which featured exactly the same drivers but was housed in a cabinet that was just over 12cm deep compared to the standard version’s 35cm.

KEF produced a number of other models around that time. The original Celeste was a two-way ‘bookshelf’ model that was a lot smaller than the K1 Monitor and used the now famous B139 ‘racetrack’ bass driver.

The Celeste was available in both standard and toughened-up portable form. Curiously, the portable version is physically bigger, as you can see above.

During the 1970s KEF continued to develop its range. The move from mono to stereo recordings meant that speakers became smaller to account for the need to have two of them in the room. While never a KEF product, the legendary BBC LS3/5A monitors famously used the company’s drive units. KEF also built a number of products along similar lines to the BBC monitor in the form of the Chorale and original Coda.

The brand continued to make upmarket three-ways during this time too. Its increased use of measurement and dedication to strict manufacturing tolerances gave rise to the Reference moniker. The name ensured every speaker measured closely to the first reference sample.

The Model 104aB was the first KEF speaker to carry the Reference tag. KEF also continued to manufacture kit versions of its products and the KEFKIT 1 (1974-1977) was a deconstructed version of its popular Chorale speaker.

KEF’s trademark technology now is its Uni-Q driver array. This is where the tweeter sits in the throat of the midrange or mid/bass driver, giving even dispersion and helping integration. The relatively modest KEF C35 standmounter was the first to use the Uni-Q array. These were released in 1988 and within a few years the technology had worked its way into KEF’s Reference products.

While all these products gained good to excellent reviews it was the range topping 105/3s and (surprisingly) non-Uni-Q 104/2s that really caused a stir. This was also the time when KEF decided to tackle its speakers’ in-room balance more actively. It produced a number of passive outboard filter boxes to help even out the sound. That’s the slim box on top of the 105/3s (above).

Development continued on the Reference range over the years and by the 2000s it had even gained a super tweeter to take advantage of the wider bandwidth of high-resolution disc formats such as SACD and DVD-Audio. The use of a separate unit in a speaker that preached the unity of Uni-Q seems a bit odd now, but at the time that’s what the company felt was needed.

KEF pushed further upmarket with the high-end Muon (it cost £70,000 in 2009, and is double that today). In the image above you can see an early prototype of the imposing floorstander alongside Reference series speakers made around that time.

Through the 2000s the company made a great success of style speaker packages. The ‘Eggs’ in all their versions proved excellent and made a big enough sales impact to kick start the whole premium lifestyle multichannel subwoofer/satellite category. Above are examples of the types of speakers the company made.

KEF continued to develop its Reference line. The pod-mounted super tweeters gave way as the tweeter in the Uni-Q array continued to be improved.

The engineering team continued to push high-end boundaries with the Concept Blade (pictured, above) – a stunningly styled speaker that used a much improved Uni-Q array partnered with a quartet of bass drivers, all housed in a slick carbon fibre cabinet.

Such designs prove that the original KEF spirit of cutting edge technology and carefully considered engineering still flows strongly in the brand today. Long may it continue.