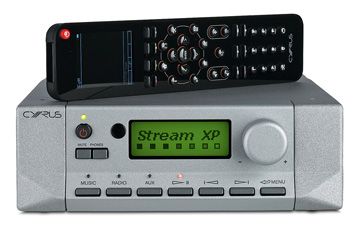 Well, if you strip out the amplification from that fine unit, add a high quality preamp and introduce higher-grade internal components, you’ve got yourself this Stream XP.

And the Stream XP is your main building block if you want to build a high-end streaming system using Cyrus components. If you don’t intend to go quite that far, you might just want to add it to an existing stereo or power amp.

The onboard DAC means you can connect digital sources directly, such as an iPod/iPhone (via USB) or a TV via one of the XP’s five digital inputs.

File support is thorough enough: WAV, FLAC, MP3, AAC, AIFF and 24Bit/95kHz are catered for, but not Apple Lossless or those rarer 24Bit/192kHz files currently available from a handful of sources.

Wired or wireless both available
We’d recommend using a wired ethernet connection to stream for optimum sound quality, but Cyrus does include a magnetic wireless aerial, which screws into the back of the unit.

The system is controlled by Cyrus’s proprietary ‘n-remote’. This backlit, motion-sensing wand comes with a charging cradle and uses a 2.4GHz RF link to talk to the main unit. Each button press or menu jump is mirrored on the unit’s display and that of the remote control.

On an initial listen, the Stream XP sounds a little restrained and uninterested. But, once the preamp has had a decent running in period, you’ll begin to hear the unit’s clarity and natural tone.

It’s a very mature and refined listen – more than the all-in-one Streamline. Any tracks played above 192kbps over internet radio or via an iPod or NAS device sounds detailed, dynamic and wonderfully musical. It’s a typically entertaining and rewarding Cyrus sound.

Further down the line, you might want to consider upgrading the Stream XP by attaching one of Cyrus’s £575 PSX-R power supplies. If you do, you’ll hear dynamic improvements while instruments and vocals sound even more organized and focused in front of the listener.