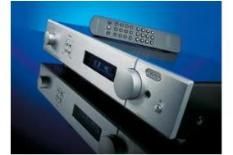 This is a smartly turned out slab of electronics. The Evolution 5350 is the midrange model in Creek Audio's current line-up, nestling between the entry-level (£600ish) Evolution 2 and top-of-the-range Destiny.

The almost obligatory, it would seem, underwhelming remote control (something of a staple with high-end hi-fi we're disappointed to report) is also at your service.

Listening to the Evolution 5350 in action, it's clear that this is undeniably a good, capable amplifier – but it doesn't quite manage completely to satisfy us.

First the good stuff – and there's plenty of it. It's an easy listen: The High Road, the opener from Broken Bells' debut LP, highlights a midrange with a spot-on tonal balance that ensures vocals have intimacy, texture and body.

Good bottom-end welly
This isn't meek and mild, though, far from it. When required, there's plenty of weight and power, in that bottom end, too – it's capable of 120 Watts per channel at 8 ohms after all.

The XX's eponymous debut is again easy to enjoy – but, knowing the album so well, we feel that all's not quite as it should be.

If ever an album needed ultimate transparency and agility to convey intricate subtleties then this is it, and the Creek doesn't quite rise to the task.

Tracks just don't hang together and engage the way they should. The Evolution 5350 can sound just a little flat, too, lacking the finesse to really hit peaks and troughs, particularly with classical pieces.

In isolation, then, this is a good amplifier and one that would make plenty of systems and ears very happy; but, for £1000, it doesn't have that all-round brilliance that knocks you for six.

And, it has to be said that, at this price, we feel there's better out there…