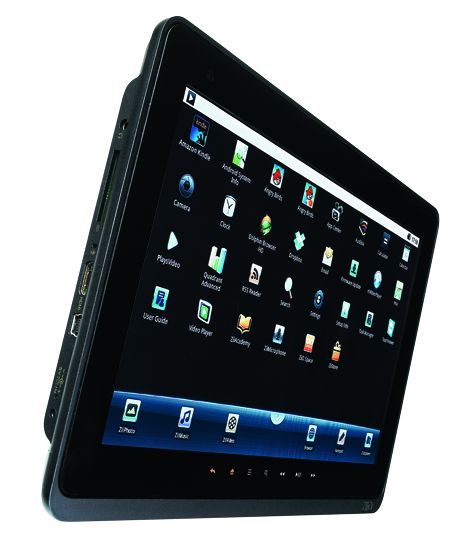 It's cheap but the Ziio isn't a bargain; it needs better performance

If you can't beat them, deliver something at half the price minus a few features. That seems to be the thinking behind the Ziio 10: an Android offering with an eye-catching price – albeit a price that's explained once you switch it on.

First things first: it runs Android 2.2 OS rather than the latest v3.0, the latter of which was designed specifically for tablets and is seen on others here. An update to this slightly cack-handed OS is unlikely.

This is most obvious on the web, where v2.2 is assigned mobile status, giving you a smartphone-style experience on a bigger screen as opposed to the better-tailored view you get from other tablets.

Corners have been cut
There's no support for the Android Market either. Instead you'll have to settle for Creative's ZiiStore, which doesn't offer the breadth or quality of apps. What's more, the preinstalled ones can't be removed.

You see where we're going with this: it's a cheap model, and corners have been cut.

The screen is resistive, so there's no multi-touch, drag-n-drop, and with a chassis that has a fair amount of flex (and joins that could be flusher), it isn't a very inspiring product to hold.

Sonically, it's OK. With a 320kbps MP3 of Kanye West's Power, there's ample punch and detail, and vocals are clear. It's a little thinner, and shows less insight than the other Android tablets here, but aptX Bluetooth streaming is a boon.

Multiple video formats
But the Ziio can play a selection of video formats that's the envy of the competition – H.264, MPEG4, WMV, AVI, MOV and MKV – but sadly struggles to do them justice.

The image lacks depth and solidity with dark black levels, while brighter colours are quite lacklustre.

It might be cheap, but it's hard to be too cheerful about this tablet. Unresponsive controls, a dated specification and so-so performance combine for an underwhelming experience.