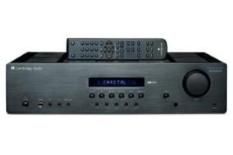 It's not quite as disconcerting as being passed in the street by a penny-farthing, but there's no denying the affordable stereo receiver has become one of the lesser-spotted hi-fi alternatives.

So hats off to Cambridge Audio for finding room for the SR10 in its new ‘Topaz' entry-level range.

After all, what's not to like about an 85 Watts-per-channel integrated amp with on-board FM and MW radio reception, five line-level inputs, a moving-magnet phono stage and the ability to drive two pairs of speakers at once?

In a price-appropriate system, the SR10 offers hints of the peppy, forthright sound that's made the pricier Azur range so popular – an upfront song like The Stooges' Real Cool Time is delivered with plenty of intensity.

A good budget solution
Although the SR10 isn't the last word in detail retrieval, its ability to make your CDs and records energised is not to be sniffed at.

FM broadcasts are similarly vigorous, and the SR10's display is big enough to make RDS of some use.

But the Cambridge has a definite comfort zone – and that zone is the budget arena. In a more expensive, ambitious set-up the SR10 is quickly found out, its relative lack of organisational skills and shortage of outright detail becoming the overt signature of its sound.

Don't allow the SR10 to get any ideas above its station, though, and it's a likeable budget integrated solution.