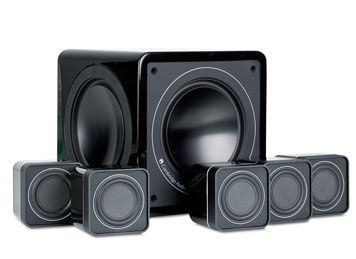 We handed out an extremely positive four-star recommendation to Cambridge Audio’s £800 Minx S325 package in January this year, but this S215 system is the one we had really high hopes for.

The S215 seems ideal for smaller rooms and/or modest budgets.

And they also boast the same quality of build and finish as the more expensive system (and the same ingenious binding-post arrangement that allows full-sized banana plugs to be used, should you so desire).

Make sure you run them in well
Behind each MIN10’s grille is a 5.7cm balanced-mode radiator, which promises wide dispersion, while the X200 features a 17cm driver and a pair of similarly sized passive radiators.

It has to be said that the system demands a good deal of running in – we gave them a good four days before we started testing proper – but once it is properly warmed up, this little Minx packages gives a very agreeable account of itself.

The DTS HD Master Audio soundtrack to the Mr & Mrs Smith Blu-ray sounds a little short of outright scale, certainly, but then that’s hardly startling news in light of the S215’s diddy dimensions.

Effects are located securely, dialogue remains distinct (even if it could project a little more), and the Minx doesn’t scrimp on the details.

Aside from that understandable lack of scale, though, there’s a dynamic reticence on display that robs soundtracks of some excitement, and a rather brash, coarse quality to the top of the frequency range that can become a touch wearing to listen to over time.

We think it’s a trade-off that some people will be prepared to stomach, though – after all, small-room systems on a budget don’t come much smaller than this.