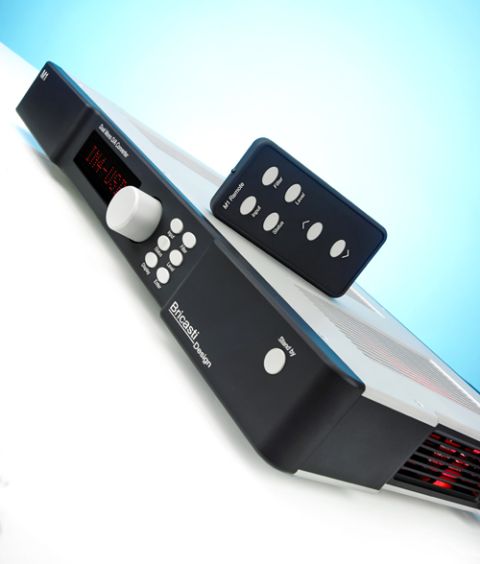 The company makes just four products: two reverb processors for studio use, an exotic remote control and the M1 digital-to-analogue converter we have on test here.

While the firm doesn’t have much heritage to brag about – it’s only been around since 2004 – the people who founded the company certainly do, having worked for high-end giants such as Lexicon and Mark Levinson.

The M1 exhibits the same aura of quality as many of the classic products from those illustrious brands. It’s a pretty functional-looking unit, but the quality of the fit and finish is excellent.

All the casework edges line up just so, and the controls feel slick and precise – no mean feat for a small company with accordingly limited resources.

First off, we like the simple, large display. It’s easy to read at a distance, even in a bright room.

The M1’s control layout is also simple, but adjusting basic functions such as changing source or filter settings isn’t quite as intuitive as it should be. It’s easy enough to learn over time though.

We’re less forgiving of the remote-control kit being a cost option at a hefty £400. It’s nicely made and features an external receiver, but it should be part of the deal at this price.

Around the back it’s fairly standard-going for a high-end DAC. There’s a choice of four inputs – USB, coax, optical and AES/EBU – with all bar the optical able to lock onto music streams up to 24-bit/192kHz.

There are also balanced XLR and single-ended RCA outputs too.

The M1 has a variable output, so can be connected directly to a power amplifier or active stereo speakers. Taking a dedicated stand-alone preamp out of the equation gives a shorter, less complex signal path, which promises greater transparency and detail.

Admirably, Bricasti is committed to developing the M1 throughout its life. The DAC now has a USB input when earlier versions didn’t, and it can accept native DSD music streams too. (DSD is the digital format SACD is based on.)

Take a look inside and it’s clear that the engineers have been obsessive. This is a true dual-mono design where the left and right channels are separated out to prevent any interaction.

The separation goes as far as having dedicated DAC circuits per channel and individual power supplies.

If you like to tweak you’re in for a treat here: the M1 has no fewer than 14 digital filter settings. There are two broad categories: ‘Linear Phase’ and ‘Minimum Phase’.

Linear-phase filters are the more common type of filter used in digital equipment. They handle the frequency range evenly, having minimal time differences between bass and treble.

To do this there has to be an inherent amount of delay in certain parts of the frequency spectrum, leading to a certain amount of rippling in the output before the leading edge of notes.

This rippling lasts for mere milliseconds, but many people are sensitive to it.

Minimum-phase filters have a different trade-off. They allow a small amount of time shift across the frequency range and suffer from more rippling after the leading edge of notes.

The advantage is that there’s no sound before the leading edge, so the edge is better represented. People also seem less sensitive to the rippling after notes than before them.

We spent a fair few hours going through the filter options and formed a distinct preference for the ‘Minimum Phase’ settings. They sound more natural and fluid in our system.

The six options of ‘Minimum Phase’ offer various degrees of high-frequency roll-off. The choice among these is more a matter of taste and depends largely on source material.

It’s worth taking the effort to get it right though, because once it’s optimised the M1 delivers a truly world-class performance.

Our main sources are Naim’s NDS/555PS streamer and an Apple MacBook. We use a range of files from highly compressed 192kbps tracks to full-fat 24-bit/192KHz material.

We try a range of DSD files too. The rest of the system is our usual reference set-up of Bryston BP26/4BSST2 pre/power amplifier and ATC SCM 50 speakers.

How does the Bricasti sound? We start off with a DSD and Stevie Wonder’s superb Innervisions. We’re really impressed by what we hear.

The M1 is an understated performer, one that doesn’t necessarily scream for attention. What it does instead is deliver a rich tapestry of detail that weaves and blends seamlessly throughout the frequency range to create a wholly convincing presentation.

Nothing stands out, but there’s heaps of rhythmic coherence and dynamic punch. Higher Ground is something of a rhythmic juggernaut and the M1 delivers every bit of that energy with conviction and precision.

Look past the power and you’ll notice finesse is in plentiful supply too in the pleasing way the DAC delivers Wonder’s distinctive vocals and the texture of the instrumentation.

Move on to Kate Bush’s 50 Words For Snow set, playing the track Snowflake (24-bit/96kHz) and the Bricasti continues to shine.

Here it shows plenty of refinement and a lightness of touch that works superbly with this slow-burner of a track.

The music is low-key, building intensity through a repetitive rhythmic beat, and the M1 has more than enough dynamic talent to convey this properly.

Bush’s vocals are clearly etched yet wonderfully full-bodied. Despite all the insight on offer the Bricasti never sounds overly clinical or analytical.

The detail is there if you want to hear it, but the spotlight is always on the whole and the music’s message.

The story is similar with CD rips from The Police and Tchaikovsky. There’s plenty of resolution, yet the musical message shines through clearly.

The 1812 Overture reveals an impressive way with dynamic extremes, and an inviting ability to render a large soundstage with sharply focused instrumentation.

Switching to low-bitrate files – a 256kbps version of Eminem’s Bad Guy – we found the Bricasti’s honesty continues to shine through.

While showing the recording for the limited-quality file it is, the M1 stopped short of tearing it apart; the music stayed entertaining (if you like Eminem, that is).

The M1 is consistent between inputs too, and any differences are more likely to be down to the different sources used.

The Bricasti’s M1 is a thoroughly impressive unit. It’s an understated performer but a deeply talented one.

If you have the system and budget to do it justice, we think you’ll be impressed.