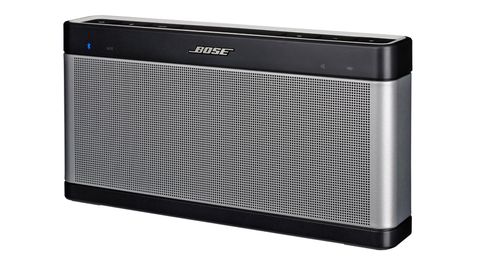 Solid build and sound, but that bass and lack of clarity has us looking at alternatives

Rich, warm with an abundance of bass – these are the hallmarks of the Bose SoundLink III’s sound.

This sturdy, portable Bluetooth speaker may have received four stars when we first tested it, but it has a tough battle on its hand in light of newer, more competitive rivals.

The SoundLink III’s robust, bass-heavy performance and that big, enveloping sound is appealing, but it’s at the cost of clarity and precision. Rich bass rumbles along satisfyingly, with plenty of power.

A smooth approach to detail glosses over harsh recordings and low-resolution Spotify streams – it’s a comfortable listen. It has no problem filling a room, either. But there’s no escaping just how overpowering that deep bass is.

Play Nick Cave and The Bad Seeds’ Red Right Hand and the fluid bassline that forms the backbone of the song overwhelms other aspects of the tune. There’s little bite or shine to the bell chimes, robbing any drama or tension. The low-end oomph, while admirable, could be better defined and pulled in more tautly.

The stop and start of notes aren’t as crisp and precise as we’d like. The staccato drumbeat in The White Stripes’ Little Room needs to hit with more impact and attack – finer detail, the clash of cymbals and high-hats and soaring dynamics are subdued in the presence of such commanding bass weight.

It leaves the Bose sounding uninspired. Voices benefit from a forward presentation and are full of warmth, but they could be crisper and more detailed to fully engage the listener.

Since it already has a tendency to get boomy in the low end, placing the SoundLink III close to a wall or in a corner will only exaggerate this quality. It’s best to give the Bose speaker plenty of space.

We’ve admired the Bose’s hefty and sturdy build quality before, and the SoundLink III exudes a premium feel befitting its £260 price tag. The aluminium chassis is impeccable, from its steel-grey finish and backlit icons to the soft-touch silicone-rubber control buttons.

The speaker is quite heavy, but it’s compact enough to carry in a backpack and the battery lasts for a decent 14 hours. The control buttons are responsive, but they do need a firm push to work. Otherwise the speaker is easy to use and pairing with Bluetooth devices takes only a couple of seconds.

A small battery-icon on the front panel indicates how much charge remains. The Bose speaker keeps connectivity simple, with Bluetooth for wireless streaming from smart devices and a 3.5mm input for hard-wiring other music sources.

Unlike rivals, such as the B&W T7 or Loewe Speaker 2go, Bose doesn’t offer aptX. The lack of transparency means this probably isn’t a big loss; we would have liked a USB charging-port here, though.

Bose really needs to rein in that booming bass to give the other sonic elements a chance.

Some rival speakers have a much better handle on their frequencies, delivering punchy highs and lows in equal measure. In comparison, the Bose sounds muddled.

The SoundLink III is a solid design, but it fails to impress when there are more capable and insightful speakers available for the same price.