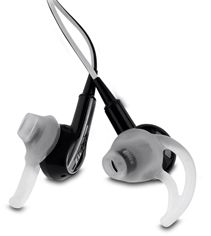 Bose has gone for a fundamentally different approach to other companies, by designing in-ears that sit outside the ear canal, rather than burrowing in.

They don’t isolate noise like most rivals do, but that can be a good thing for commuters who like to be aware of what’s going on around them.

Besides, the upside is a comfortable, unintrusive fit – and thanks to that soft gel flap, they stay in your ears far better than most.

Chunky, full-bodied sound
The MIE2is have clearly been voiced to compensate for the extra distance between eardrum and earbud, so rather than a thin, washed-out delivery you get a chunky, full-bodied presentation.

They sound pacey and detailed, too, and the soundstage is lovely and wide, with good separation on tracks that allow it.

They might be less starkly detailed than something like the Etymotics hf3s, but they’re no less valid as a result.

The mic and three-button remote work well, too.