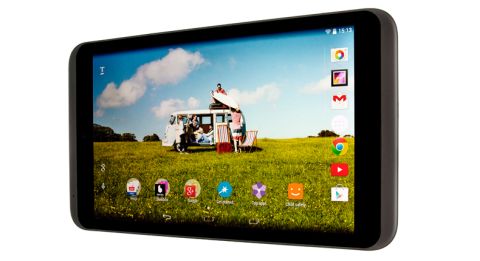 At this price there’s little to grumble about – this is a good budget tablet, but we would like a better music performance for the full five

After the runaway success of its 2013 predecessor, Tesco’s Hudl is back with an updated spec list and new design in the hope of once again showing the budget-tablet market how it’s done. The good news all round is that it absolutely succeeds. For those unaware of the brand, you did read correctly.

Popular supermarket chain Tesco is now a tablet manufacturer, and the biggest surprise of all is how good it is. For its price tag of £130 (and even less if you use the company’s Clubcard vouchers against it), the Hudl 2 packs an impressive spec sheet and performance that far excels its price point.

It’s still not going to give the iPad mini a run for its money, but then that’s not its intention. This is a budget tablet and that needs to be considered when assessing its performance. If you want the very best, you will need to look elsewhere, but if you’re wanting a good, accessible tablet that costs less than half of most of its competitors, read on.

The Hudl 2 has had a screen size boost from its predecessor - up from 7in to 8.3in - and its resolution has been given a welcome increase to full HD as well. There’s a respectable 273ppi, which comes close to – and in some case exceeds – many of its pricier competitors.

Design is much improved from last year, and it both looks and feels a little more refined. The bulky bezels from the original Hudl have been shaved off along its longest edges, and it’s slimmer too. At 9mm and 410g, it’s still on the chunky side next to the competition, but it feels good in the hand with a soft-touch plastic back.

There’s a bit of flex to the casing, but you won’t notice it in normal use – it’ll be its penchant for fingerprints you find yourself battling against the most. Overall though, its design balances functionality and style with reasonable consideration, and there are eight different colours to choose from this year, which is a nice touch.

It’s available in 16GB only, but there is a microSD card slot for boosting it by another 32GB if you need. It's a great addition for a budget slate, as is the HDMI port for connecting the tablet up to your TV.

When it comes to picture performance, there’s very little to grumble with at this price. Video is clean and crisp, with ample detail and a good handle on motion. It’s a bit softer around lines and edges than pricier competitors but that’s only to be expected.

Whites are slightly on the creamy side and blacks don’t go to the inky depths of the Samsung Galaxy Tab S 8.4, but it doesn’t detract from the overall picture being too rich and engaging, with colours well judged and accurate. We would like it if the screen went a little brighter in order for it to be used more easily outside, but it’s a small niggle and certainly far from a deal breaker.

You’ll have to make some compromises on audio quality at this price, but we’d still take the Hudl 2’s well-balanced, listenable character over the hard-edged Nexus 9 any day. Overall, there’s a lack of sonic detail and insight when compared with something like the Sony Z3 Tablet Compact, lacking a bit of punch and the dynamic wherewithal to effectively portray a song’s peaks and troughs, louds and softs.

It is perfectly enjoyable, though, and can be listened to at length without fatigue – it’s just not enough to capture our interest in the same way as elsewhere. The stereo speakers on the Hudl sit on the back of the device and are Dolby optimised. Play a movie and they’ll go pretty loud with dialogue clear and direct, though the treble is a little harsh and unrefined and soundtracks can sound a little muddled.

The Dolby tie-in introduces some extra sound controls in settings, allowing you to change the sound balance whether you’re listening to movies, music or for things like video chat. Multimedia use will drain the battery on the Hudl quicker than we’d perhaps like, offering around 7-8 hours under heavy use.

Considering it’s a tablet made by Tesco, you expect to find some of its own apps and software pre-loaded here – but it’s been nicely done. Alongside a largely vanilla version of Android 4.4 KitKat, there is a small ‘T’ in the top-left-hand corner that serves as the hub for everything Tesco.

This includes, but isn’t limited to, access to your Clubcard statements, grocery and clothing offers, suggestions for content from Tesco’s Blinkbox services (now covering music, movies and books), recipes through Tesco’s Real Food website and access to personal banking through Tesco Bank.

Of course, if you’re not a Tesco user, you can simply ignore the tab completely. But if you are a Tesco shopper, it’s a handy hub to have just one tap away.

Other software tweaks added by Tesco are equally helpful: suggestions for popular apps to download, a child-safety feature that allows you to create profiles for your kids and lockdown the content they can view, and a ‘get started’ app, which will walk you around some key things to do with your Hudl when you first get it out of the box.

It makes this a really accessible tablet for those who are new to the world of tablets.

General performance throws up no major issues, with its 1.83GHz quad-core Intel Atom processor and 2GB RAM keeping things running smoothly for the most part. It’s a little slow to change orientation when you swap from portrait to landscape, but we didn’t experience any crashes or major stutters.

It doesn’t have the smooth swiping experience of pricier Android tabs, but it’s far from sluggish. The 5MP-camera on the Hudl 2 is certainly one of its weaker points, and even in good light, shots look soft and washed out, with auto-focus often unreliable and exposure unwieldy.

It’s certainly not a reason to buy the Hudl 2; but then a tablet is far from an ideal snapping companion – you’d be much better using the camera on your phone.

The Hudl 2 is a decent little tablet that requires a little understanding and leeway when it comes to balancing performance with value, because it offers plenty of both. In many respects it can take the fight to some of the pricier Android tablets out there, but overall it lacks the refinement available if you spend more.

We’d thoroughly recommend the Hudl 2 as a device for families, tablet newcomers and anyone looking for a bargain. Tesco has done it again – the unexpected champion of the budget-tablet world.