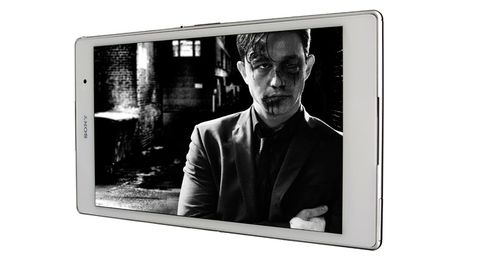 Sony’s Z3 family goes from strength to strength with this tablet, with a superb performance Android can be proud of

Sony has had a busy year in the portables market. Not content with launching two flagship smartphones and a whole family of supporting handsets and wearables, we now have this to add to the family – the Sony Xperia Z3 Tablet Compact.

A not-so-compact name for a rather compact tablet, it’s Sony’s first crack at a small-form tablet, following on from the so-so success of the company’s 10.1in Xperia Z2 Tablet earlier this year.

Sony has listened to the feedback it received from that and has acted accordingly. The unsightly chunky bezel and unwieldy design is gone, and has been replaced by a super-slim and light one that makes the Z3 Tablet Compact a great portable companion.

At 6.4mm it’s even slimmer than one of its biggest competitors – the Samsung Galaxy Tab S – and at 270g, weighs 30g lighter too, meaning it’s comfortable to hold for movie watching.

Sony’s Omnibalance design has been refined here in the same way as it has on its smartphones, softening the metal edges down to more of a subtle curve, which, when teamed with its matte-plastic back panel, makes the tablet easier and more comfortable to hold.

Despite its largely plastic construction, the Z3 Tablet Compact still feels sturdy and durable, and at this screen size, its super-slim profile makes much more sense than it did on its larger screened sibling, which we noticed was prone to flexing.

That’s not to say there isn’t the odd creak here if you want to really give it a go, but there’s not the same feeling of fragility, and while it doesn’t feel like the triumph of design that its Z3 smartphone sibling is, the Z3 Tablet Compact certainly feels like a step forward for Sony’s tablet line-up.

As we’re becoming accustomed to, the Z3 Tablet Compact is waterproof for up to 1.5m for up to 30 minutes. We’re not imagining that much will ever be necessary for most, but it’s good to know you can watch Breaking Bad in the bath, or take it into the kitchen or down to the beach without worrying about accidents.

An 8in-screen features on the Z3 Tablet Compact, in the same 16:9 aspect ratio as the Samsung Galaxy Tab S 8.4. When compared side-by-side, there’s more than a passing resemblance between the two, apart from one big difference: their screen resolutions.

Sony has chosen to stick with a full HD screen here in the same way as it has done on its phones, which might seem like a bad move when it has the 2560 x 1600 resolution on the Tab S 8.4 to compete with.

But this is an excellent screen all the same, and Sony’s reasoning of not wanting to compromise battery life for a 2K screen is one we fully support – particularly when the results are as good as this.

Sony’s own figures quote around 15-hours for video playback, but on our rundown test, looping a 720p video at half-brightness with wi-fi turned on, the Z3 Tablet Compact managed an impressive 17 hours 6 minutes, with no help from any of its (excellent) power saving modes. That’s nearly seven hours more than the iPad – and in a tablet you’ll be using on the go, that’s useful stuff.

Play a movie on it and it becomes even more impressive. Compare it against the 2K-packing Samsung and we have to say we’d take the Z3 Tablet Compact’s balance any day.

Like all of Sony’s portable devices, it’s packed full of Sony display technology, some of which works better than others.

‘Triluminos for Mobile’ and ‘Live Colour LED’ do a fine job at helping with colour accuracy and contrast, but we always jump straight into the menu to turn off ‘X-Reality’ for mobile – its added processing always makes images look overly sharpened.

Once we’ve played with the settings, the results are great. Play a 1080p clip on the Z3 Tablet Compact, and colours are punchy and bright yet manage to remain convincing, with a good tonal spread, particularly across the main colours of green, red and blue. There’s plenty of detail to go at, and despite the differences in resolution, we’d say that its about on par with the Samsung for detail retrieval.

It can’t quite top Samsung for blackest blacks, and its probably just pipped for contrast too. That’s not to say it’s bad, but the SuperAMOLED display on the Tab S 8.4 has its strengths, and this is it.

Whites on the Sony are bright though and, with some tweaking of the white balance settings, can be as pure as they come. Left with the settings out of the box and there’s a slight pinky tinge to them, but it’s mostly noticeable when browsing rather than in video playback.

General performance is good here, with the Z3 Tablet Compact’s quad-core Snapdragon processor and 3GB RAM doing the job to keep things moving along without hiccup or delay.

You’ll get 16GB of on-board storage, but you can expand this via microSD by another 128GB.

Sony’s interface, like most manufacturer skins, will be something that will take some getting used to. It’s loaded to the hilt with Sony apps services, which can be a little annoying – especially when many of them duplicate Google’s own excellent options.

It’s probably to be expected – after all, Apple and Google are no different. If you like or subscribe to Sony’s entertainment services (namely ‘Music Unlimited’ and ‘Video Unlimited’), their integration in the ‘Movies’ and ‘Walkman’ apps is useful, offering up new releases for suggestions, and there are often free trials for you to try them out.

Worth a mention is Sony’s ‘PlayStation 4 Remote Play’ feature, which allows you to play PS games on your tablet.

You’ll need to be on the same wi-fi network as your console for the best performance, which does limit it somewhat, but if you’re in the middle of playing and someone is complaining about needing the TV, you can carry on your tablet, handily attached to your DualShock controller using a special mount, if you wish.

The smaller screen won’t work for all games, and it’s no match for the pure processing grunt behind a PS4 when it comes to fast action, but for carrying on gaming, it’s sharp and detailed enough to scratch that itch.

Musically, we’ve been pretty impressed with Sony’s most recent performances, and it’s no different on the Z3 Tablet Compact. It’s taken a long time for something to come and take the iPad’s crown as the best sounding tablet, but the Sony has done it.

There’s a richer tone to it than we’ve heard on Sony smartphones, sounding weighty and full bodied, and closer to the iPad in terms of character than ever before.

Yet there’s more fine detail here, and a touch greater handling of rhythm and timing – not that the iPad mini 3 is a slouch by any means, but the Z3 Tablet Compact just takes it. It’s refined and precise, a really enjoyable listening experience that is one of the best we’ve ever heard on a tablet.

That’s supported by the fact the Sony Z3 Tablet Compact is capable of high-res music playback up to 24-bit/192kHz, and sounds great to boot. There’s added detail and greater transparency to tracks, offering each element of a song plenty of space to expand and develop. Dynamics are better to that end too, though you will need to pair the Z3 Tablet Compact with some decent headphones to really hear these differences.

The tablet’s stereo speakers are front-facing. The sound is a little smaller here, comparatively, and feels a bit squashed dynamically. It’s clear enough though and largely well balanced, but for long periods, you’ll need a quiet environment around you to make everything out (particularly dialogue).

For taking photos, the Sony doesn’t do a bad job at all. Its form factor makes it a little more acceptable to use it for the odd snap, so it’s good to see Sony hasn’t scrimped here.

There’s an 8.1MP-rear camera, with a 2.3MP-front facer supporting, and we found shots to be sharp and detailed.

As on the Z3 smartphone, the camera app is stacked with modes and features (with more available for download if you wish), including a fully manual mode, the ability to stream live to YouTube and plenty of creative modes for adding some flair to your snaps.

The Sony Xperia Z3 Tablet Compact is an excellent addition to the Z3 family, offering a great video experience, a superb way with music and a startlingly good battery life – all wrapped up in a slim and stylish shell.

While its name might be a bit of a mouthful, this tablet’s performance more than speaks for itself, and we really like what it’s saying.

MORE: Best tablets 2015: which one should you buy?