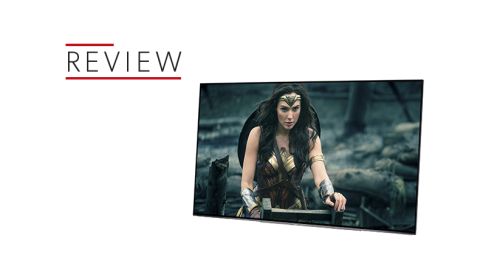 LG selling its OLED panels to other manufacturers is a good thing for TV buyers – more OLEDs means more choice and, ultimately, lower prices. But it also raises the question of whether it’s actually a bad thing for LG’s own OLEDs.

On this evidence, it might just be. The KD-55A1 Sony OLED TV, is an absolute belter of a telly – one that might just have LG a bit worried.

Making a TV that looks unique is a tricky thing, but Sony has a long history of doing just that (remember the KD-65X900B with its awkward-looking but ultimately logical placement of big speakers either side of the display?).

The KD-55A1 (or KD-55A1BU as it's sometimes known) continues the trend with an easel-like design that leaves the screen leaning back at a slight angle. The display portion of the chassis is just 78mm thick, with the chunkier stand portion housing all of the connections and a subwoofer.

The rest of the speaker system is extremely clever, consisting of four drivers that vibrate the glass panel to create a sound. To all intents and purposes, this is an invisible speaker system that means the bezel can be super-thin all the way around. Let there be no doubt; this is a beautiful bit of design.

Do be aware, though, that you’ll want a wide piece of furniture for the A1 to stand upon. The ends of the display (which is 122cm wide) can hang over the edges of a shelf or stand without issue, but it doesn’t look quite right.

You won’t want to plonk it on top of something that’s too high, either, as the angle of the screen makes it look odd.

Speaking of positioning, wall-mounters will be in for a treat. Despite the unusual design there are standard VESA mounting points on the back, and while the sub/connection portion of the chassis means the TV stands a fair way off the wall (8.6cm to be precise), it gives the impression that the display is almost floating.

It’s fair to say that the user-interface hasn’t been lavished with as much attention as the physical design.

The A1 is powered by Android Marshmallow 6.0, which is perfectly useable and has just about every on-demand app you could desire (Now TV is the only significant omission), but it isn’t as slick or welcoming as the user-interfaces of Samsung or LG’s current TVs.

It’s not the only UI you encounter when using the A1 either. TV picture and sound settings are contained within Sony’s own menus, and TV is supplied by YouView.

All of which leads to a slightly jarring user experience as you flit from Sony’s serious black and white menus to YouView’s blue highlights and TV show thumbnails, then to Android’s grid of apps and games. You encounter slight pauses as you go – nothing too annoying, but LGs and Samsungs are snappier.

That’s not to say there aren’t good things about Sony’s software. If you have a Google phone or tablet or regularly use a Google account, signing in is quick and gives you easy access to your Google Play Movies & TV content.

The Discover feature is nice, too. Tap the dedicated button on the remote and a row of cards appears, each one representing a piece of content that you can access instantly.

By default, the first three rows are given over to YouView (live broadcasts, featured catch-up content and on-demand films each get a row), then one for Netflix (Continue Watching and Trending in one row), one for YouTube, and finally a row of other apps – but you can reorder these if you want.

It’s a quick way to get directly to what you want to watch (immediately pick up where you left Daredevil without having to first open Netflix and search for it there), but the new Samsung TVs have a similar feature that supports more apps, including Amazon.

Sony has let LG and Samsung overtake it in terms of remote control, too. Compared to Samsung’s super-streamlined, silver zapper and LG’s pointer-like wand with user-definable shortcuts, the A1’s remote control is basic and rather cluttered.

Six buttons around the direction-pad feels like too many, for example, and you’ll find yourself having to look for the correct button more than you might with a controller that’s more stripped-back and intuitively laid out.

If the Sony’s user interface is something of a mixed bag, the picture performance is a resounding success. What’s more, you don’t have to tweak too many settings in order to get the screen looking its best.

The colours are a bit overdone by default, but this is easily remedied by dropping the Colour setting down a few notches and switching Live Colour from Medium to Low.

We’d also recommend turning off the Light Sensor, which automatically adjusts the brightness of the screen according to the ambient light in the room.

We leave a few other processing options on, such as the Advanced Contrast Enhancer, X-tended Dynamic Range and Motionflow. Having spent a few hours experimenting with these features, we think they genuinely add to the picture.

And what a picture it is. Start with some HDR content from Netflix (as you do) and, while there’s no Dolby Vision support just yet, it’s hard to imagine it being much better when it’s added via a firmware update later this year.

You get everything you expect from an OLED in terms of deep blacks combined with punchy, perfectly uniform whites, but the way the A1 defines edges and reveals textures is beyond our already lofty expectations for this TV tech.

It makes everything look that little more solid and three-dimensional, with images popping from the screen. It’s stunningly dynamic but, with our tweaked colour settings, also superbly realistic, steering clear of over-saturation but lending a lovely lusciousness to vegetation and the right amount of warmth to skin tones.

Motionflow plays its part here, too. On an LG you have to choose between the slight soap opera look when you add a little bit of TruMotion or a slight blurring when you turn it off.

The A1’s Motionflow gets the balance just about spot on, removing blur without adding weirdness. Motion processing has long been one of Sony’s strengths, and that looks set to continue in the OLED era.

Switch to 1080p Blu-ray and the A1 is, if anything, even more impressive. Of course, there’s an expected drop in resolution, but the Sony’s dynamism goes beyond what other TVs offer with the same content.

Again, it’s the combination of punchy colours and deep blacks, and the way that’s used to better define characters and objects that makes the A1’s picture so enticing.

Play Fantastic Beasts and Where to Find Them and, as Newt and Tina walk through the streets of New York, the cobbles are more clearly defined and more obviously slick from recent rain, with patches of sunlight reflecting effectively.

The underside of the monorail they’re walking beneath is darker than other sets manage, but no less detailed, and even people and objects right at the back of the long street are sharply defined.

It’s such a textured, solid image, and a scene teeming with life and activity.

Watching standard definition, you’re likely to be pleasantly surprised by the quality of the picture too. Our tweaked colour options ensure there’s a good balance of realism and dynamism, and detail levels are high given the poor quality signal.

It doesn’t clean up and control the image in quite the same way as the LG OLED65E7V (which is also 10in bigger), but it’s a perfectly passable picture in its own right.

Gamers should be aware of a few things though. The Game Mode is irritatingly buried in the menus (unlike the awful Live Football Mode), but the TV should default to it after you’ve selected it once.

The game mode is too warm as standard, so you’ll want to switch the Colour Temperature from Expert 1 to Neutral. And finally, input lag with a 4K source (PS4 Pro, Xbox One S or a good PC) is around 30ms, which is good.

However, when receiving 1080p, that lag goes up to around 47ms. That’s still quick enough for the vast majority of gamers not to register any lag at all, but it’s something ultra-hardcore gamers should be aware of.

Regardless, the picture quality with games is absolutely stunning, with the set’s vibrancy, dynamism and sharpness making the action jump from the screen.

So, does the A1’s unusual approach to sound work? Actually, it does.

Compared to most TVs, this is a more direct and weighty delivery with a good amount of punch. The sound is projected a long way into the room, and there’s even a bit of stereo separation.

A decent soundbar will still offer a significantly better performance, particularly when it comes to dynamics and detail, but by flatscreen standards this is decent, especially when you consider that for all intents and purposes the speaker system is invisible.

Two quick tips: leave the Surround Mode off and switch off ClearAudio+. The former just doesn’t do a great deal and the latter artificially boosts bass and treble at the expense of overall balance.

Sony’s first ‘proper’ OLED is absolutely brilliant. A stunning design featuring a unique sound solution and picture processing tech and software that’s so good that it beats our already lofty expectations of OLED.

We haven't tested enough 2017 sets to say whether the A1 is an Award-winner, but it’s absolutely the new benchmark at its size and price.