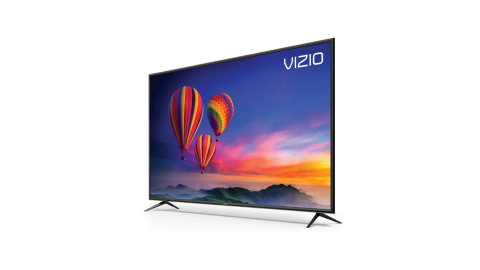 The Vizio E65-F1 offers 4K and HDR support for a reasonable price, but it has a number of limitations that are frustrating

While the 65-inch Vizio E65-F1 is the company’s entry level set, in terms of price, it sits somewhere between the super-budget sets that sell for less than $500, and the premium models that cost upwards of a grand.

It seems to be a sweet spot and in its E Series, Vizio manages to deliver a solid product and a reasonable value, offering a picture that’s good enough to stop you wishing you’d spent more.

For a TV that could still be described as “budget”, the E65 has a nice design, with narrow bezels, a metal strip along the bottom of the cabinet and a relatively slim profile.

Two black plastic feet sit at either end of the screen, giving it a footprint of 50.6in wide and 11.5in deep, though you can also wall mount it with a 400 x 200mm VESA mount.

It comes with a remote, which curves at the back to sit nicely in the hand.

It does a decent job of helping you to browse both live TV and smart TV menus, though the keys sit a little too flush with the body of the remote for our liking. There’s also no backlighting for use in darkened environments.

It has a square directional pad and the standard channel controls, along with six pre-programmed app buttons for quick access to Amazon Prime Video, Crackle, iHeartRadio, Netflix, Vudu and Xumo. They’re pretty prominently placed, which is great if you use one of them, but not so good if you don’t.

The E65 has connections that you can access from the right and downwards, with the right-facing inputs offering particularly easy access at just a few inches from the edge of the display.

Across both sections, there is a total of four HDMIs (including one with ARC support), a USB, a coaxial in for aerial connections and both component and composite video inputs. Outputs support digital surround sound and analogue stereo sound.

For getting online to use Vizio’s SmartCast operating system, there’s an ethernet port for wired connectivity or 802.11ac wi-fi for wireless.

SmartCast offers great features but is a little limited compared with the competition, offering just 22 locally installed apps. Still, a lot of those 22 cover off the big names, including Netflix, Hulu, Amazon Prime Video and YouTube TV, so you aren’t missing out too much – plus it comes with Chromecast functionality, so you can use that for a lot of the services the TV itself misses.

The Vizio WatchFree app is included as one of the 22, which repackages streaming channels from Pluto TV, giving you several channels of movies, news and indie content presented linearly. That means there’s no on-demand here, and no ability to fast forward or rewind either. The biggest problem is the content it features is already available via the pre-installed Pluto TV app, so what could be a killer feature is actually just repeat content.

We do wish the E-Series had support for voice commands, like the competition from LG and Samsung. Even TCL’s Roku sets offer it, so this isn’t a premium feature out of its reach. You can, at least, pair the TV with a Google Home or Amazon Echo to get this in a roundabout way, but it would’ve been nice to see the support included natively.

Considering its reasonable price, the E65 manages to offer a lot of the features you’d want from a 4K TV, including broad HDR support that covers off not just HDR10 and HLG for broadcasts, but also Dolby Vision.

This is backed up by the inclusion of full-array backlighting and local dimming – features we would usually see on pricier sets. That local dimming is particularly helpful with effective HDR performance as it helps to ensure dark areas stay as dark as possible, while brighter highlights get the punch they require.

The only downside here? The number of zones. Look at Vizio’s pricier P-Series Quantum and you’ll find 192 zones of lights able to dim independently of one another. In the E65, you get just 12, meaning it won’t produce the same level of control.

Still, the backlight performance is pretty good for a basic set, though the E65 does still suffer with some light blooming due to imprecise backlight dimming. There's a  noticeable “halo” effect around light objects in dark scenes, which can be a little distracting.

The E65 offers a crisp, detailed picture with vivid and accurate colour reproduction. In scenes from Spider-Man: Homecoming, the E65 managed to pack a punch into the bold colors of Spidey’s suit, as well as the orange Staten Island ferry, but for the most part, it never looks unrealistic.

For gamers, 60Hz 4K gameplay is supported straight out of the box, but you need to do some menu digging in order to get 10-bit color and HDR. It means adjusting your settings for whichever HDMI port you are using with you console to enable HDMI 2.0 functionality.

Why it isn’t switched on by default like the majority of manufacturers is a head scratcher for us, but it doesn’t take too long to sort it once you know what you have to do.

The E65 comes with two 10-watt speakers built in, which offer passable volume levels but don’t get as loud as we’d like.

That said, it does a decent job of separating out a soundtrack so it doesn’t all become a mess of sounds, and in a climactic fight scene from Spider-Man: Homecoming, the mix of dialogue, sound effects and soundtrack music comes through clearly.

There’s no subwoofer here, so bass is limited, meaning action scenes might lack a bit of authority and music will sound a little hollow.

For fuller, richer sound, we'd definitely recommend pairing the E65 with a soundbar to add volume and bass.

For those on a budget, the Vizio E65-F1 SmartCast TV offers great value for a 4K TV, promising great picture quality, a decent feature set and premium touches you might not expect, including local dimming and Dolby Vision support.

The lack of locally installed apps at this price might be an issue for some, and the lack of voice interaction, but with workaround options available, these shouldn’t really be dealbreakers.

That said, if you have a bit of budget going spare, an upgrade to the TCL 6 Series Roku TV might be worth it. For the $999 price tag, you’ll get better picture quality, an improved backlight with more dimming zones and a wider selection of apps.

At this price though, you’ll do well to find much better.