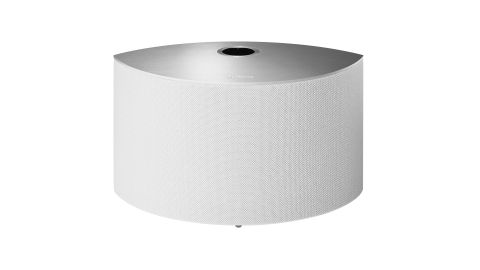 Sonically, this Technics speaker is a five-star product, but software issues manage to trip it up

This year alone, two Technics turntables and an SACD/CD streamer have been resounding, five-star hits with the What Hi-Fi? team. We’ve therefore got high hopes indeed for the first wireless speaker that we’ve been able to test from the Japanese audio firm - the catchily named Ottava S SC-C30.

The Ottava S SC-C30 has four delicate little pointed feet; the kind that might descend from the undercarriage of a UFO. Combined with a central, downward-pointing power light that initially greets you, the SC-C30 appears almost to hover from some angles when you switch it on. Our review sample is cloaked in black fabric, with a premium-looking aluminium top panel. At 31.5cm across, it's wider than we had expected.

The SC-C30’s aluminium and glass-fibre body houses five drivers: a pair of 16mm soft-dome tweeters, two 6.5cm woofers and a front-facing 12cm cone subwoofer. These are driven by digital amplification that’s controlled by sophisticated software that aims to reduce jitter and noise issues while optimising the performance from the drivers.

A nifty feature of the SC-C30 is Space Tune. The speaker already has three audio presets (‘Free’, ‘Near a Wall’ and ‘Near a Corner’), but holding the press/pause button for five seconds activates the ‘Space Tune’ function. Using the built-in mic, the SC-C30 then emits several swooshing noises and automatically adjusts the sound so that it is tailored to wherever you’ve placed it.

The six buttons around the SC-C30’s circular display can be used to switch between input options, which include Bluetooth, auxiliary, optical, USB, internet radio and Chromecast-enabled apps. Using the Technics Audio Center app, you can also stream music files from a device on your network.

You can register nine favourite stations or playlists on the device by holding down the star button on the display, and you can also control the SC-C30 by voice, if you have a suitable voice-activated unit, such as a Google Home Mini, to pair it with.

The SC-C30 has been designed for the living room, and is at its best when placed close to a wall. Here, it offers a big sound for its dimensions – the bass weight solidity in particular is impressive. Jay-Z’s Picasso Baby is rhythmically tight and, while the bass is not overly forward, it’s nicely balanced.

Most alternatives are more prominent in the bass, but what the SC-C30 offers is agile, controlled and lag-free. There is ample separation between the softly-spoken French voices and Jay-Z’s heavy rap. When the beat periodically stops dead to leave us in silence, the Ottava obliges with precision and picks up exuberantly from where it left off. Tom Ford, from the same album, proves that the SC-C30 is capable of handling fast-paced rhythmic treble frequencies too.

We switch to Junius Meyvant’s Floating Harmonies and the keys are well-balanced across the gamut of frequencies, dynamically nimble alongside Meyvant’s lilting, softly-sung vocal. In Bruce Springsteen’s Thunder Road, meanwhile, we’re met with a similarly detailed, musical and emotive harmonica at the outset of the song.

But despite the excellent sonic performance, the SC-C30 can’t get the full five stars. The unit’s control software and partnering app prove rather buggy during testing, with lags in response making for a frustrating user experience, particularly during playback and volume adjustment. It performs better when hardwired into our network, but not enough to completely eradicate these issues. And that’s a shame, because Technics has done so much right here.

The Ottava S SC-C30 is a premium-looking product with all the right features that sounds great for the money. We’re surprised that a company with the resources of Technics hasn’t managed to make the control software work seamlessly. Until it does that, the C30 remains a tempting but flawed proposition.