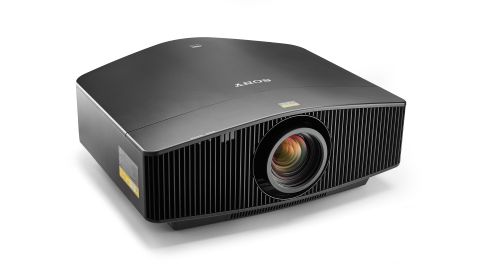 Colour, clarity and long lasting performance, those are the promises Sony makes about its VPL-VW870ES 4K projector. With an SXRD chip at its core, the same technology that powers the company’s professional grade machines, we have high hopes for Sony’s latest 4K offering.

When we tested Sony’s previous true 4K projector, the VPL-VW270ES, at the end of 2018, it took us so close to a genuine cinema experience we could almost taste the popcorn. It wowed us with what it could do, and so even a £5,000 price was fair for a movie experience of such quality. However, at £25,000, the 870ES comes with a considerably bigger price tag. Can it justify that difference?

The VPL-VW870ES is a sizeable unit, as one might expect of a top-end, 4K home cinema projector. At 22kg, compared to the 14kg of the VPL-VW270ES, installing one in your screening room is no small consideration. You’ll need a dedicated piece of furniture to house it, or some heavy-duty screws and plugs if you decide to wall- or ceiling-mount it.

As for inputs, there are two 18Gbps HDMI sockets for video, a USB for system updates and a LAN for smart installation purposes, all of which are neatly tucked away. The matte black finish means the VW870ES is as subtle as a 56 x 23 x 51cm projector is going to get, at least visually – the noise from the fan in our review unit is intrusive throughout testing. That wasn’t the case with the VW270ES, so it is most likely down to an issue with our particular sample.

Elsewhere, the look and feel is excellent. The on-screen menus are easy to follow and, if they won’t win awards on their own, the 870ES’s remote just might. It feels good in the hand, has the obligatory backlight and offers easy access to all of the lens adjustments, picture settings and viewing modes. In fact, there’s barely any need to press the Menu button.

Getting the projection display just right is a little trickier than it could be, with the motorised lens proving a touch too twitchy, making fine adjustments a little tricky, but otherwise, we’ve only good things to report in terms of usability.

SXRD is Sony’s compromise between DLP and LCD projection technologies. Much like JVC’s superb proprietary D-ILA invention, it’s a liquid crystal on silicon construction (LCoS). Perhaps the biggest drawback of LCoS is the price. It’s also difficult to optimise, which is why you’ll only find JVC and Sony doing it.

Sony’s true 4K projectors start at £5,000, but if that’s the cost of SXRD, what do you get for an extra £20,000 from the VPL-VW870ES? The first major cost is Sony’s Z-Phosphor laser light source, which promises 20,000 hours of operation compared to mercury lamps offering around a quarter of that. The second significant engineering improvement is the glassware on the front. The VPL-VW870ES sports what Sony calls an ARC-F lens (All Range Crisp Focus).

Made up of 18 elements, it is designed to optimise the colour convergence from the three SXRD panels for a pin-sharp and colour accurate picture, and it does so for a 100in display at a distance between 3m to 6m, with a throw ratio of 1.35:1 to 2.90:1. The ARC-F is interchangeable though, so, for an additional £8190 cost, you can switch it for the VPLL-Z7008 short focus zoom lens, with its throw ratio of 0.85-1.06:1, to cut  the projector-to-screen distance to under 2m.

Both the Z-Phosphor laser’s output and the size of the iris, which sits behind your lens of choice, are constantly and automatically adjusted for the benefit of dynamic range. Each helps to tailor the correct amount of light according to the brightness conditions of the scene it’s trying to reproduce.

According to Sony, that gives the 870ES a contrast ratio of infinity:1 – part of the reason is the projector’s Advanced Iris which self-adjusts during playback. The idea is that it optimises the amount of light let through according to the light levels in each scene. In our tests, we get a better picture with the Advanced Iris setting switched off, as it tends to blast out the brightness of light areas.

The 870ES supports the HDR10 dynamic range standard and it’s a treat to take in the levels of depth and detail this 4K projector produces in scenes with bright cloudy skies, or dusky landscapes with dark water shorelines. The 870ES is also compatible with HLG, the 4K HDR broadcast technology used by the BBC and Japan’s NHK broadcasting corporation.

The presets are decent too. Taking the Reference mode, we turn down the colour setting a notch, raise the hue up a bit and increase the brightness a smidgen, and come up with a palate that Sony should be proud of. Rich and natural, no matter the source, this is where the VPL-VW870ES really sings.

Whether watching a film that's been graded like an old time, Technicolor western, such as our 4K version of The Hateful Eight, or something with a surreal edge, such as a 1080p copy of Life Of Pi, it’s the kind of viewing that could convert you to a projector for life.

What might make you think twice, though, is in the black performance – the 870ES falls short of superb here.

We play the submarine attack scene in Aquaman in UHD, where the action takes place against a low-lit, metal grey backdrop. Here, the Sony projector creates a credible rendition of the mission team’s black uniforms. The suede grain of the textiles conveys the idea of a classified, high-end waterproof fabric, and the texture of the leather knife sheath, passed fatefully from father to son, is so good we can almost feel it.

However, compared to a top end TV, there’s still an inkier shade for these blacks to reach. While the 870ES creates a beautiful sense of depth, true blacks are just beyond its reach.

At the bright end, the details are even more impressive. As Kurt Russell trudges from stagecoach to shack through the blizzard of The Hateful Eight, the snow has such differentiation that you can begin to appreciate why the Inuits apparently have so many words for the stuff.

Likewise, Jason Momoa’s reluctant journey back to Atlantis in Aquaman could easily have been lost among all that computer-generated bioluminescence, but the detail on show only heightens the audience’s sense of wonder. The sparkles of dancing light on the surface of the sea in the genuine footage scenes are good enough to upstage the acting.

We put Sony’s six Motionflow settings to task using the wheat field countrysides and the futuristic urban landscapes of Looper. The best compromise between judder and sickly smooth over-processing lies somewhere between the Combination and TrueCinema modes.

The former gives the most stable picture as the camera pans across the wooden supports of the barn where the hero processes his victims. The latter is preferable to keep the flying vehicles looking realistic as they came into land on the city streets.

Even with fast-moving films, such as The Edge Of Tomorrow, we are pleased with the results, and both 4K and upscaled 1080p sources are exhibit the same qualities in terms of motion. That said, if you are particularly sensitive to motion processing, the Off setting still delivers great results so long as you can put up with a little more judder.

The VPL-VW870ES can process source material from SD all the way up to a maximum of 4096 x 2160px resolution at 60fps. We are seriously impressed with the consistency of performance between UHD and upscaled 1080p. The projector’s ability to artificially generate effectively 75 per cent of the picture on the fly is mind-blowing.

The lifelike skin texture renders of the young Bruce Willis in Looper in Full HD were only shown up once we switched back to the 4K presentation of Aquaman. It’s only when we dropped all the way down to Zombieland in standard definition that we feel we're watching something truly inferior. Naturally, the VPL-VW870ES can also produce a 3D picture. Sony’s glasses are available for an extra £50, but any RF specs you happen to already own will work just fine.

All in all, this is solid work from Sony – the VPL-VW870ES is a true movie maestro.

These last fractions of picture magic come at a cost, though, and at £5,000, the VPL-VW270ES offers such a good chunk of that same cinematic quality that it’s hard to justify the extra £20,000 spend on this machine

At the other end of the spectrum, £35,000 will buy you the D-ILA-powered JVC DLA-Z1 - the finest projector that’s ever graced the What Hi-Fi? test rooms. The VPL-VW870ES is rather stuck in the middle, then, despite its broadly excellent performance.

Projector screens: everything you need to know
Best projectors 2019