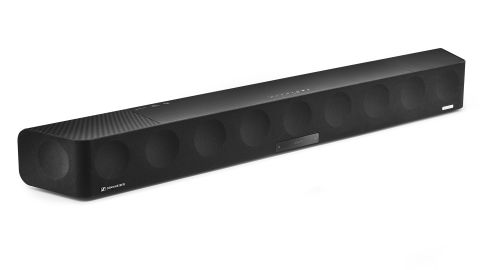 Huge, expensive and fussy, but Sennheiser’s first soundbar is well worth the money and effort

It’s amazing that Sennheiser has waited until now to launch its first consumer speaker. Apparently unmoved by the Bluetooth speaker craze, and so far resisting releasing a range of multi-room or smart speakers, the company has seemingly been tempted to venture outside its headphones comfort zone by the advent of Dolby Atmos, which it has built into a soundbar.

There are already plenty of Dolby Atmos soundbars out there, but the Sennheiser Ambeo Soundbar is different: it’s much more expensive, much bigger and a fair bit fussier. But it’s also much better. In fact, it’s the best sounding soundbar we’ve tested.

The Sennheiser Ambeo Soundbar is much bigger than most products of its type. Measuring 127cm wide and 14cm tall, it’s a real beast. The Sony HT-ST5000, by comparison, is 9cm narrower and 6cm shorter.

A big factor in the Sennheiser’s comparative heft is that it approaches the soundbar conundrum in a different way to most before it. While the Sony and most of its contemporaries combine vast arrays of small drivers with a separate (often wireless) subwoofer, Sennheiser has opted for much larger drivers that are capable of covering a far greater portion of the frequency range, negating the need for an external sub. This is a genuine one-box home cinema solution (the more recently launched Sonos Arc follows a similar template).

That’s sound reasoning, but the size of the Sennheiser still creates some practical issues. Placed in front of the Samsung QE65Q90R, which has an extra-tall pedestal to accommodate a soundbar, the Sennheiser obstructs the bottom couple of inches of screen and the IR receiver. It can’t be placed on a lower shelf, either, as that will block the upward-firing drivers that create the Dolby Atmos effect.

The ideal scenario is to have your TV wall-mounted, and the Sennheiser below it, either on a shelf/rack or wall-mounted itself. Even so, you need to take into account the Sennheiser’s 18.5kg weight and the extra cost of the dedicated wall-mount bracket. And yes, given the Ambeo's hefty price tag, it does seem rather galling that the bracket isn't included in the box.

The dimensions and weight of the bar aren’t the only things to consider during positioning, either. Like most products of its ilk, the Sennheiser bounces sound off your room’s walls and ceiling to create surround and Atmos effects, and while the mic-driven calibration will compensate at least somewhat for an irregularly shaped and/or cluttered room, there’s no substitute for central placement on a wall and as few sonic obstructions as possible.

Though positioning the Sennheiser requires a good deal more effort than most soundbars, it’s easier than setting up a genuine Atmos surround sound system. What’s more, the Ambeo Soundbar's delivery is worth making the effort for.

Around the back of the Ambeo Soundbar you’ll find four HDMI sockets, three of which are standard inputs, and one of which is marked ‘TV’ and supports eARC (Enhanced Audio Return Channel).

This means that not only can the Sennheiser pass signals (4K and HDR, including Dolby Vision, are supported) from the other inputs to the TV, it can also receive sound signals – including Dolby Atmos – from the TV via the one cable. That’s useful if Netflix and/or Amazon are your main movie and TV show sources, as both already carry a good chunk of Atmos-enabled content.

It's worth noting the Ambeo Soundbar also supports DTS:X, another object-based surround sound codec that you can find on some 4K Blu-rays in place of Dolby Atmos.

Alongside the HDMIs are an ethernet socket (wi-fi is also supported), USB (for updates only), an optical input and a stereo RCA aux-in. There’s a subwoofer pre-out, too, should you feel the need to add a dedicated bass unit.

As well as the physical connections, the Ambeo Soundbar also supports Bluetooth 4.2 and Chromecast, making your streaming options almost endless.

The small display on the front of the unit flashes up the selected input and sound format received, while there’s also a backlit Ambeo logo. The brightness of both can be adjusted from within the Sennheiser Smart Control app, which also gives you access to advanced options such as input renaming and an equalizer.

Most of the time you’ll be controlling the soundbar using the chunky, bundled remote. As well as the source and volume buttons (which are confusingly alike and next to one another, ensuring regular incorrect presses in the early days of ownership), this remote has dedicated buttons for a number of audio presets, plus an Ambeo button for activating or deactivating the virtual surround processing.

The driver array nestled within the casework consists of six 10cm woofers and five 25mm tweeters arranged across the front and sides, plus two, upward-firing, 9cm full-range drivers. Calibration involves plugging in the bundled mic, which has an integrated, surprisingly solid stand, and waiting around a minute while sounds are fired out and measured. It’s awesomely fast and straightforward.

Once calibration is complete, we make a beeline for our Atmos-enabled 4K Blu-ray collection. Starting with the bombing run scene of Unbroken, we’re immediately impressed by the Sennheiser’s performance. As the bomber squadron approaches its target, the chatter among the crew is clear and direct, while the room is filled with the rattling sounds of the cruising B-24 Liberator. This is the calm before the storm, and the Sennheiser delivers it with subtlety, insight and atmosphere.

Things get serious when enemy fighters emerge from the clouds, and the Sennheiser steps up a gear, filling the air with precisely placed machine gun fire. When an enemy fighter strafes the bomber, the Ambeo provides a brilliant, focused build up as the plane approaches then a huge, room-filling zoom as it flies by. The dynamics really are exceptional for a one-box device, as are the scale and spaciousness.

Switching to Alien: Covenant, we’re struck by the natural, full-bodied reproduction of the dialogue in the opening scene. Guy Pearce’s voice is a lovely baritone, and those bassier frequencies fill out his dialogue. While some soundbars with external subwoofers go deeper, the bass here is delivered with weighty gusto and seamless integration. This is what helps the Sennheiser achieve the sort of effortless, natural tonality and texture that most rivals can’t begin to match.

The large minimalist room of this opening scene creates echoes and reverb that less sophisticated speakers miss out on but that the Sennheiser delivers. This isn’t simply a case of the audio stretching out to the left and right, which a lot of sound systems, even those built into TVs can do. The Ambeo Soundbar does that but also stretches into the room, up to the ceiling and almost around the listening position. There are limits, of course, and rear effects don’t quite get behind you, but the fact that some effects get very close is impressive.

Perhaps what’s most impressive about the Ambeo Soundbar is how little attention it draws. It’s testament to its ability that you don’t really notice it going about its business. So convincing is the processing, you’re not made aware that its happening – you simply enjoy the film or TV show that you’re watching.

We leave the Ambeo mode on with everything we watch, as spaciousness and atmosphere is added subtly, ensuring the audio still sounds natural, even with standard 5.1 and stereo content. We also stick with the Neutral preset for most content, although the extra weight and scale offered by the Movie mode works very well, too.

Those who enjoy late-night films and gaming will likely find the Night mode useful, as this reduces bass and compresses dynamics so as to be less disturbing to anyone in the house who would rather not hear what you’re watching.

We’re not ones for pre-judging products, but we have to admit that we didn’t expect the Sennheiser Ambeo Soundbar to be nearly as good as it is. Surely it couldn’t be worth the high price and comparative hassle. But it really is.

It’s expensive for a soundbar, rather huge and quite fussy with positioning, but these design decisions have been made in the name of superior sonics, and they seem to have paid off. By using bigger, higher quality drivers the Ambeo Soundbar is able to produce audio with rare, natural tonality, cohesion and solidity, and the 3D audio processing is utterly convincing.

This is the best soundbar we’ve tested, and the best way to get surround sound into your room without filling it with lots of individual speakers.