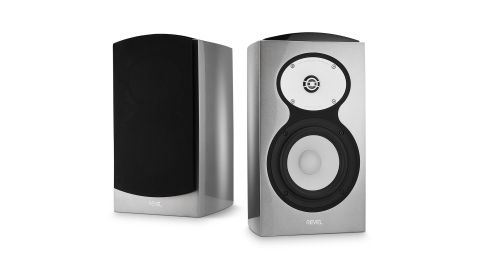 A mature, sophisticated speaker that’s nevertheless up against some impressive competition

The sub-£5000 standmounter market is a tough one to compete in. Not only do you have to battle the likes of KEF’s Reference R1s, Bowers & Wilkins 805 D3s and Dynaudio’s Contour 20s, but there are truly excellent options at half the money, such as ATC’s SCM 19s, that have to be comprehensively bettered. That’s no easy task.

On paper at least, Revel’s Performa 126Bes look like they might struggle. The design template is based on the company’s Performa3 M106 (£1999) but with uprated drivers, a revised crossover and a classier finish. Is that going to be enough? We can’t wait to find out.

The first bit of positive news is indicated by the ‘Be’ in the product’s name. That stands for Beryllium, the material used for the M126’s 25mm-dome tweeter. Beryllium is a great material to use in tweeters thanks to a balance of rigidity, low weight and self-damping that is notably superior to the aluminium or treated cloth most of the opposition use.

Why don’t we see it used more then? It’s expensive and difficult to manufacture, so normally only makes an appearance on far pricier speakers than these.

Revel hasn’t stopped there. It uses large 85mm twin ceramic magnets in the motor system and a carefully shaped faceplate. That faceplate – a fancy thing made of ceramic-coated cast aluminium – isn’t shaped just to look interesting either.

It’s the fifth iteration of the company’s acoustic lens design that’s contoured to control the tweeter’s directivity so that it matches that of the mid/bass unit at the crossover region. The result should be improved integration between the drivers.

The M126Be’s mid/bass driver is far more exotic than that used on the base speaker. It increases in size from 13cm to 16.5cm and the aluminium cone gains a ceramic coating to help with rigidity and control resonance. The motor system has also been upgraded, with a larger voice coil and revised motor system. The aim is to reduce distortion while improving dynamics. A conventional rear-firing port is used to tune the bass.

The two drivers are mated through a high-quality single wire crossover that uses film capacitors and air-core conductors to maintain signal integrity. We have no issue with the lack of bi-wiring. While it takes away the option of bi-amping – something we think genuinely has benefits – we suspect the majority of people will value the reduction in cable runs more.

Those curved cabinets are nicely finished and come in a choice of four gloss finishes: black, white, walnut and metallic silver. At just 37cm high, they’re pretty compact by class standards, and that small size helps with rigidity, but most rivals we’ve tested exude a greater aura of luxury.

These Revels aren’t particularly fussy as far as positioning is concerned. We think they’re best in small to medium-sized rooms, a little away from the rear wall and well away from room corners. We end up with them toed-in slightly towards the listening position to give us a suitably solid presentation.

These are transparent performers, so it pays to use a suitably talented system. Our test set-up of Naim ND555/555PS music streamer/SME Synergy turntable and Burmester 088/911 amplification is at the very top end of what the Revels would normally be partnered with, but the very fact that they can be given such a top-class signal shows just how capable they are.

The M126Bes are understated but sophisticated performers. Their presentation is impressively clean and precise. Given a dense recording, such as Radiohead’s 15 Step, they reveal a mass of detail and present it in a composed and organised manner.

Some rivals can sound confused and messy when reproducing this demanding piece, but the Revels sound comfortable dealing with the barrage of instrumentation and noises.

They’re also agile and able to communicate the changing momentum of the track well while delivering enough in the way of punch to satisfy. Bass is decently weighty for such compact speakers, but here the Revels fall behind slightly larger alternatives when it comes to outright low-end punch and overall sonic authority. It seems those pesky laws of physics can sometimes be bent but not broken.

We love the Revel’s midrange though. It’s just so clear and subtle. Thom Yorke’s vocals come through with all their passion intact and remain easy to follow no matter how complex the instrumental backing gets.

Our initial listening suggested that the M126Bes might have a bit of edge in the treble. But, given a few days of use, this feeling faded leaving us with a crisp and insightful top end that has plenty in the way of bite but enough refinement to be relatively forgiving.

This is brought home when we listen to Bruce Springsteen Terry’s Song. It’s a touching tribute to a deceased friend, but the recording sounds more like a rough demo than a polished finished article. On some speakers, this recording sounds hard, thin and edgy, but the Revels, while revealing the production shortcomings, refuse to make a meal of things.

We play Arvo Part’s Tabula Rasa and the M126Bes deliver an impressively expansive and nicely layered soundstage. The instruments are convincingly positioned and remain locked in place as the piece builds. With eyes closed we can’t locate the physical position of the speakers – something that speaks well of their dispersion characteristics and integration.

The M126Bes are great at rendering subtle instrumental textures and capturing the dynamic nuances that are essential to making this piece so emotional. They make a decent fist of generating scale and authority too, though some standmounter rivals manage to emulate larger speakers even better.

We have no complaints when it comes to tonal balance though. These boxes sound impressively even and balanced. It must have been tempting for Revel’s engineers to try to overdo the bass, but we’re glad they’ve chosen a more purist approach. In the long run it’s likely to be a more satisfying direction to take.

These Revels may not be front-runners at their price but they remain deeply capable and sophisticated performers. They have a mature approach to music replay that works well across a wide range of musical genres and recordings.

If you’re looking for a standmounter at this level, they’re well worth an audition alongside the more obvious choices.