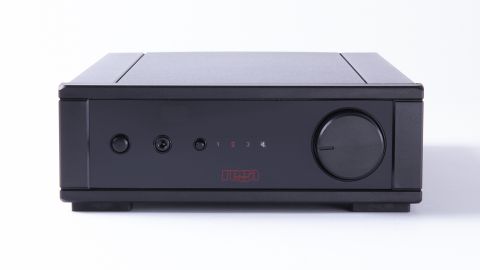 Simple, but no less successful for that; this is yet another superb-sounding Rega amp

While Rega used to make a high-end DAC called ‘io’, the naming of its latest amplifier is almost certainly a nod to the familial link with its big brother, the excellent Rega Brio. It’s not far off half its price or half its performance – and so, quite reasonably, it has half its name.

The 30W-per-channel, entry-level io can be purchased individually, or as part of Rega’s System One all-in-one proposition with the Planar 1 turntable and Kyte speakers (£999). It borrows the power amplifier and phono stage from its Award-winning elder sibling and that goes a long way to explain the pleasing sonic resemblance between the two.

The discrepancies between Rega's two half-width boxes in terms of physical size and decorative refinement is more or less mirrored in their sonic differences.

The Brio (£599, $995) is a bigger-sounding component with a more polished presentation; it injects more space between strands of music and conveys them with notably greater detail and dynamic precision. It does what it should to justify its extra spend over the io, keeping it relevant in Rega’s line-up between the io and Elex-R.

But Rega’s consistency with components and their implementation makes the io instantly recognisable as a descendant of the Brio. In fact, we could repeat the very same words we used in our Brio review, including ‘incredible sense of rhythm, punchy dynamics; agility, detail and fun’.

Play Drake’s Money In The Grave ft. Rick Ross, and the io’s nature comes to the fore, its natural sense of momentum driving the dominant bassline forward. The deliveries of the two rappers have the transparency, richness and clarity that demands they are taken note of, while the amplifier’s innate musicality captures the rhythmic chimes that hold it all together.

The similarly priced Marantz PM6006 UK Edition offers more space around the vocals and an overall maturity to the rendition, but its smoother, more laid-back approach comes at the cost of not quite being able to capture the track’s energy.

Similarly, with Aparat’s violin-led 44, the Marantz (and the Brio) add a welcome dose of refinement and extra space and openness over the io. But while the io is a cruder listen, it still seizes the strings’ abrasive texture and captures the foreboding emotion, while tracking their dynamic movement too. It may not have the sonic sophistication of its rival and big brother, but its directness and buoyancy make for a truly compelling listen.

The io should be paired with like-minded speakers, such as the Elac Debut 2.0 B6.2 or Bowers & Wilkins 606. Note too that Rega has done well to keep quality and character consistent through the headphone output.

Ultimately, with the arrival of the io, Rega’s unmistakable and unquestionably entertaining signature amplifier sound is now more accessible than ever. And, as we cast our minds back to when we first learned of the Rega io’s existence, that is all we could have hoped for.

To pack such a performance into this price point, Rega has, as with all its amplifiers, stuck with analogue-only connections here. Despite the digital friendliness of the Marantz, analogue-only is common at this end of the market. The io sports two line-level inputs (two fewer than the Brio) and an MM phono input, so you can hook up a turntable as well as a couple of components such as a CD player and streamer.

A 3.5mm headphone jack completes the io’s fairly modest connectivity list. It sits on the front panel alongside a volume dial and a small plastic button that cycles through the inputs. The io’s plastic front panel gives it a pretty unremarkable aesthetic. Rega certainly isn’t trying to hide the fact that most of its efforts have gone into the performance.

The compact, half-width aluminium chassis feels well built – the same goes for the satisfyingly simple remote control – and its low-key design should suit some hi-fi traditionalists.

What will most win fans over to the Rega io, though, is its class-leading performance. While it may not be the versatile, all-inclusive Marantz PM6006 UK Edition, those who are happy with a simple, no-fuss, purely analogue amplifier and who prioritise entertainment should arguably consider the io their number one choice.